Holey Moley is a competitive miniature golf series that premiered on ABC in 2019. The show is hosted by Rob Riggle, Joe Tessitore, and Jeannie Mai.

The Muppets appeared throughout the show's fourth season (branded as Holey Moley: Fore-Ever), which premiered on May 3, 2022. The Muppets were employed by Riggle to help ensure the series gets renewed for another season, with recurring plotlines including Pepe the King Prawn kidnapping Stephen Curry and Miss Piggy preparing a big musical finale.

A teaser video for the season featured a vocal cameo from Kermit, yelling "Fore!" as a golf ball baring his likeness crashes into the screen. (YouTube)

In the season four premiere, Rob Riggle recruits Kermit the Frog and company to help ensure that the series will get renewed for another season amid (fictional) budget cuts. He fields suggestions from Fozzie Bear, and later Animal, Camilla the Chicken, and the Swedish Chef. This results in starting to plan a big production number finale and Pepe the King Prawn kidnapping Stephen Curry. 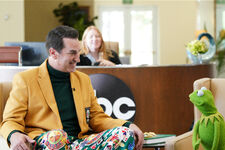 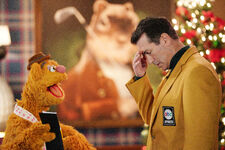 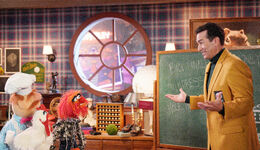 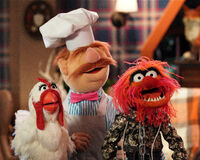 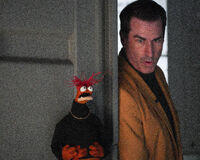 Rob thanks Kermit for agreeing to help save "Holey Moley." Kermit suggests that they get a big star to help with the big finale and says there's one star he knows that can do it. Rob asks if he knows "Weird Al" Yankovic, to which Kermit clarifies that he meant Miss Piggy. Later Pepe appears with the still-kidnapped Stephen Curry to introduce one of the holes. 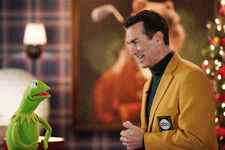 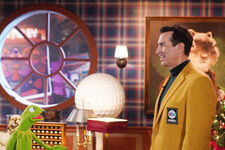 Rob meets with Miss Piggy at an autograph signing to recruit her to help with the big finale. Pepe takes some cellphone pictures of Stephen Curry, who is still tied-up and gagged. 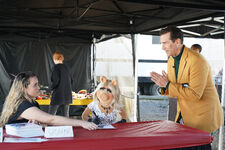 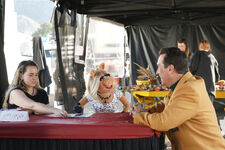 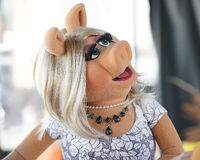 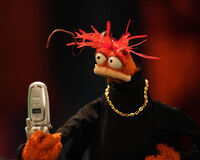 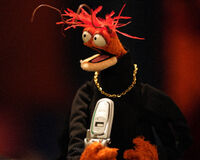 Pepe attempts a ransom video with Stephen, which results in the two instead getting their own sitcom pilot at ABC.

Rob now gets Kermit to recruit the other Muppets to help save the show, including Big Mean Carl (and his rabbit Larry), Animal, the Swedish Chef, and Camilla. Statler and Waldorf also appear.

Kermit fields an idea from Lew Zealand. Later, Rob convinces Kermit that they need to replace Joe Tessitore. Sam the Eagle auditions as a replacement. Statler and Waldorf also appear.

Auditions to replace Joe Tessitore continue with Bobo the Bear and Joe from Legal. Kermit then joins Tessitore and Riggle in the booth for some commentary. Statler and Waldorf also appear.

Rob dines with Piggy as they discuss the plans for her big, distractor finale. Later, Uncle Deadly introduces her to Jeannie Mai, who will serve as her understudy. Statler and Waldorf also appear. 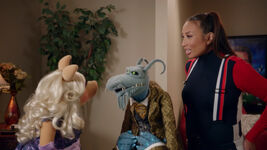 Kermit joins Tessitore and Riggle in the booth once again for the first round of male competitors. Meanwhile, Miss Piggy prepares for her big number as the final hole distractor, but gets locked in her trailer. Statler and Waldorf also appear to close out the season.

Wikipedia has an article related to:
Holey Moley
Community content is available under CC-BY-SA unless otherwise noted.
Advertisement