The Hollywood Bowl is a famous modern amphitheatre in the Hollywood area of Los Angeles, California, that is used primarily for music performances, and has a seating capacity of 17,376. The amphitheatre is well known for its band shell, a distinctive set of concentric arches that have graced the site since 1929, and is set against the backdrop of the Hollywood Hills and the famous Hollywood Sign.

Big Bird shared conducting duties with Sidney Harth for the LA Philharmonic in a 4th of July fireworks celebration.[1]

From September 15 to 17, 2006, Miss Piggy, Kermit, Statler and Waldorf appeared at the venue for a series of "Fireworks Finale" farewell concerts for conductor and Founding Director of the Hollywood Bowl Orchestra John Mauceri, celebrating his sixteen seasons with the orchestra as well as the World Premiere of Danny Elfman's "The Overeager Overture".

Miss Piggy appeared in five different outfits, and was sometimes seen full-body (bunraku-style). In her first number, she perfectly botched up Richard Wagner's "Ride of the Valkyries" in full viking attire, to which Statler and Waldorf plugged their ears in disbelief. Afterward, Piggy gave her very own version of "Fever", slipping and sliding around on a piano in a scarlet-red dress, falling off gracelessly only to and be lifted back up even more un-lady-like by Mauceri.

In Kermit's first number, the frog handed Mauceri music sheets to "Born to Be Blue", to which the latter strongly objected, and started conducting "Bein' Green" instead.

For Kermit and Piggy's final number, the duo channeled Sonny & Cher's "I Got You Babe", with Piggy not being quite sure which outfit to pick, leaving her frog angry and alone on stage. After Kermit reprimanded her, she figured out that it wasn't her own costume that needed to change, but Kermit's. The pig put a wig on her frog to complete the image, and they almost made it through the song... if it hadn't been for Piggy's agent interrupting them on her cell.

Another special guest for the concerts was Kristin Chenoweth. 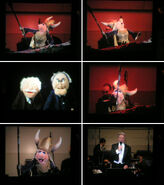 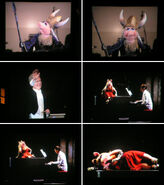 Piggy on the piano, singing "Fever" and... 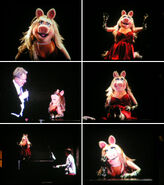 ...slipping, sliding and falling off 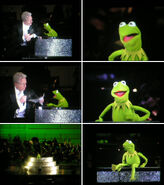 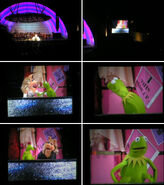 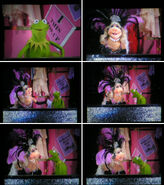 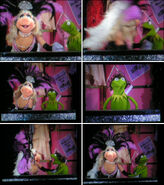 ...for Kermit as well 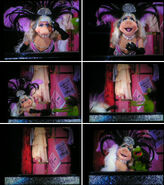 "I Got you Babe" cell phone interruption and finale

On September 10-12, 2010, the human cast of Sesame Street, including Alan Muraoka, Alison Bartlett, Bob McGrath, Emilio Delgado, Loretta Long, Roscoe Orman, and Sonia Manzano performed a medley of Sesame songs including "What's the Name of That Song?," "Rubber Duckie," "Sing," "I Love Trash," "C is for Cookie," "The People in Your Neighborhood," "Tu Me Gustas," "One of These Things," "Mah Na Mah Na," the "Sesame Street Theme" and more with the band Pink Martini. 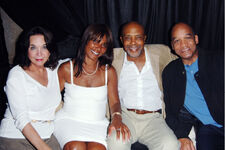 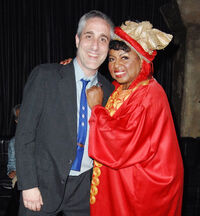 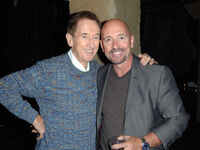 see The Muppets Take the Bowl

Wikipedia has an article related to:
Hollywood Bowl
Community content is available under CC-BY-SA unless otherwise noted.
Advertisement