The Honkers are fuzzy creatures from Sesame Street who communicate by honking their bulbous noses. Conceptualized by Tony Geiss,[1] the Honkers made their debut in Season 12,[2] first appearing in Episode 1458.

Honkers come in a variety of colors, and baby Honkers are hatched from eggs. It is not known how closely related (if at all) the Honker species is to that of The Dingers, although there are similarities between the two. According to Episode 1674, Honkers are native to the Land of Honk and have their own flag (displaying a bulb-horn). The Land of Honk would be referenced again when introducing the Honker contestant on "Name That Sound!"

As the Honkers never speak, their performers vary, depending on puppeteer availability. In the feature film Follow That Bird, Tim Gosley performed the Honker who served as Oscar's car horn. That specific Honker puppet has been given different names several times. Another Honker whose name has been mentioned is Henrietta Honker, the small pink honker. The four Honkers who appear on "The Sound of H" are named Herb, Helen, Harold and Hanna. Hillary Honker is mentioned on "Good Day Sesame Street," receiving a half-birthday shout-out from weatherman Millard Hog.

Most of the Honker puppets were constructed with only one arm, built for the puppeteer's left hand. This arm is directly connected to the front of the body, but on the television screen, it is barely noticeable due to the amount of fur and fabric on a Honker's body, and the framing of the puppet on-screen.

A few songs have focused on the Honkers and their unique talent, including "Honk Around the Clock" and "The Honker-Duckie-Dinger Jamboree". A list of Honker puppets used on the show: 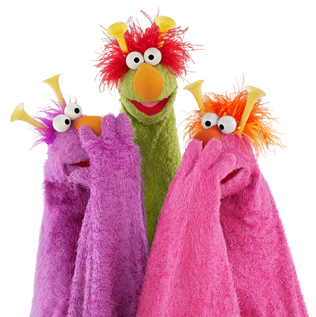 Performers of the Honkers have included Brian Muehl, Kathryn Mullen, and Cheryl Blaylock, all of whom did them in "The Honker-Duckie-Dinger Jamboree", and Pam Arciero and Jim Martin, who operated them in "Conga".

Despite being depicted on Sesame Street as non-vocal, in A Muppet Family Christmas, they are seen singing along with the rest of the crew during the musical numbers.

Retrieved from "https://muppet.fandom.com/wiki/Honkers?oldid=1322342"
Community content is available under CC-BY-SA unless otherwise noted.