Hooper's Store is a 2001 book in the "Elmo's Neighborhood" series, in which Elmo follows a little black puppy all over Sesame Street. It was reissued in 2009 in the "Where is the Puppy?" series.

Elmo is tired from looking for the little black puppy all over Sesame Street and he wants something sweet and cold. He just got his allowance and goes to Hooper's Store to buy a Hooper's Super Duper Sundae. But Herry Monster tells him he needs two dollars for the sundae, and he only has one. Elmo doesn't want to wait until next week for his allowance before he buys his sundae. Baby Bear suggests that The Tooth Fairy could give him a dollar for a tooth, but Elmo doesn't have any loose teeth. Ernie says he earned the money for his sundae by helping people with jobs such as washing the car, brushing a dog, or recycling cans and bottles.

Elmo decides to earn money by doing these jobs while he keeps an eye out for the puppy. He offers to wash Oscar's very dirty taxi, but he thinks he's crazy; a grouch taxi is supposed to be filthy. Then Elmo sees Barkley holding his brush and brushes him, but Barkley doesn't have any money. Finally Elmo asks his mother if he can keep the money they get if he helps recycle all the cans and bottles. She agrees, and they take 20 bottles to the recycling center. A delighted Elmo grabs the dollar they get back and runs back to Hooper's Store to order his sundae.

Just as Herry starts to make the sundae, Betty Lou enters the store collecting money for the Sesame Street Pet Shelter. Swayed by thoughts of the puppy, Elmo gives his two dollars to her instead of buying the sundae. 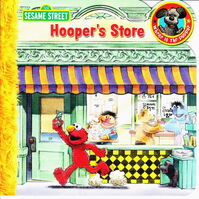 2009"Hooper's Store"
Where is the Puppy? series
Creative Edge/Dalmatian Press
ISBN: 140379202X
Add a photo to this gallery
Retrieved from "https://muppet.fandom.com/wiki/Hooper%27s_Store_(book)?oldid=1092196"
Community content is available under CC-BY-SA unless otherwise noted.