Hoor Wie Klopt Daar Kinderen - Een Sinterklaasfeestje Met Bert en Ernie (Hear, Who's Knocking, Kids? - A Saint Nicholas Party with Bert and Ernie) features Bert and Ernie celebrating the feast of Sinterklaas (Saint Nicholas), a Dutch winter holiday. The material on this record was recorded for the album and never featured on the show.

Bert and Ernie are waiting for Saint Nicholas to arrive at their house. Bert is very nervous, and Ernie tells him to be patient, but teases him about it as well. The two pals have put their shoes by the fireplace;[1] Ernie did not get any presents, but Bert got a chocolate pigeon, which he was supposed to share. An even more nervous Grover comes in with a poem he can't read well. He gets to join the party. Saint Nicholas and his helper Zwarte Piet (Black Pete) eventually arrive to deliver their presents. Ernie is a little naughty when he pulls the Saint's beard, and Bert wonders if he could grow a beard like that. Saint Nicholas enjoys their songs so much, that he leaves a large sack full of presents at their house. 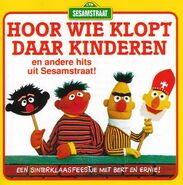 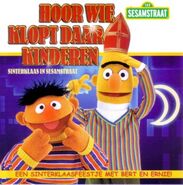 Retrieved from "https://muppet.fandom.com/wiki/Hoor_Wie_Klopt_Daar_Kinderen?oldid=1160698"
Community content is available under CC-BY-SA unless otherwise noted.