In 1992, the Elephant sang "The Elephant Elevator Operator", celebrating his job. He filled the entire elevator car, which frustrated the people who wanted to ride in the elevator, but he still enjoyed traveling up and down. This appearance was one of the few Sesame performances by Dave Goelz.

A year later, when Sesame Street went "Around the Corner" for Season 25, the Elephant continued his employment, making recurring appearances as "Otis the Elephant Elevator Operator" in the Furry Arms Hotel. This name was a reference to the Otis Elevator Company.

For years, the Elephant didn't have a specific role on the Street. He regularly appeared as a "spoiler" in various situations, coming through a scene and creating some kind of clumsy havoc. For example, in the punchline of the song "Mr. Between," he appears as "Mr. On Top Of" and crushes the singer. He also appears in Elmopalooza, willing to be a part of the show (even saying he'd work for peanuts). He changes into a curly blonde wig (spoofing Lord of the Dance) and shows off his dancing skills which shakes the theater.

Mazzarino's interpretation of the Elephant speaks in a high, screechy voice and occasionally wears a tutu. One early instance is a segment where Big Bird imagines him dancing. (First: Episode 3951)

In episode 4116, the Elephant came "all the way from Staten Island" to Hooper's Store to be a student at Alan's pretend school, though it was not explicitly stated that he lives there. This episode also revealed the Elephant's limited rhyming abilities, when he attempted to rhyme the words "cat" and "Albuquerque."

While the character has mostly served as a generic elephant, often voiceless, he has been named on occasion. Grover refers to him as "Stevie" in a Global Grover segment first seen in Episode 4033. In the 2004 direct-to-video special A Celebration of Me, Grover, the Elephant says his name is "Frank." By Season 38, he took on a more prominent role and was permanently named "Horatio" by writer Belinda Ward.[1]

The Elephant was originally designed as a large hand puppet. Occasionally, the Elephant's trunk would be controlled with a rod, like a Hand-Rod Muppet. He was later made into a full-bodied costume by adding legs. 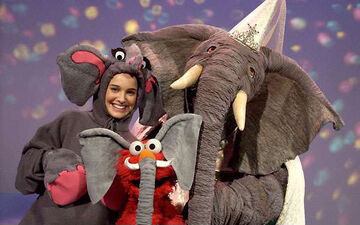 Natalie Portman, Elmo and Horatio the Elephant play "The Princess and the Two Elephants." 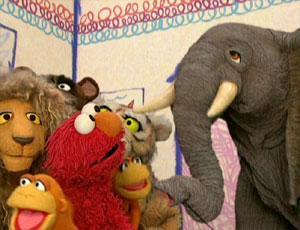 The Elephant in hand puppet form as seen in Elmo's World: Wild Animals.
Add a photo to this gallery

Start a Discussion Discussions about Horatio the Elephant