"Hot and Cold" is a Sesame Street song performed by Katy Perry and Elmo. The song parodies Perry's "Hot n Cold." The musical segment, originally intended to air as part of episode 4238, was pulled from the show due to concerns over Perry's low-cut outfit.

In the segment Katy wants to play dress up with Elmo like he promised, but he runs off instead. She sings about the many places he is (up, down, around, in, out) and how contradictory his is to her (being hot, cold, yes and no) while chasing him all over the city. When she finally catches him, he says they're playing tag and the chase continues.

Oscar the Grouch makes a cameo peering out from an alley-way trashcan; and a green Anything Monster, several Muppet chickens, two birds, a cactus, a penguin, two small dogs, and a butterfly also appear in the digital environment of the video. The backgrounds were produced by Magnetic Dreams Animation Studio.

Though unused on the show, the song was performed in the Sesame Street Live show, Make a New Friend by Elmo and Grover, when they feel Abby Cadabby and Chamki have forgotten about them. 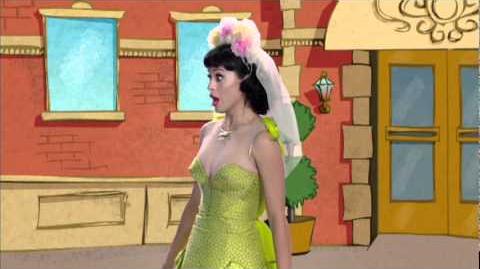 Sesame Workshop released the video online via their YouTube channel to promote the upcoming 41st season. As the clip rapidly approached the million-hit mark, Perry's low-cut costume started an uproar among parents and conservatives. On September 23, it was announced that the segment would be pulled from the television broadcast of Sesame Street due to the feedback from viewers of the YouTube video. Producers found the segment to be provocative for television, even though Perry's "bare chest" is reportedly covered in flesh-colored mesh that goes all the way to her neck.

“I was there, and she had this mesh thing on top of it and I didn't even notice. I didn't think anything of it, and I'm pretty sensitive to things my daughter sees and it didn't even strike me as anything. My daughter was there on set with us and she thought [Perry] looked like a Barbie doll, she thought she was beautiful and she loved to watch her. Not to say I don't see other people's point of view — I get it — but it didn't hit me at first, at all... If it had been shot in New York, we would have done it different and costumed her. We didn't have a costume department out there [in Los Angeles], and that's one of the reasons that happened.[1]”

“Sesame Street has a long history of working with celebrities across all genres, including athletes, actors, musicians and artists. Sesame Street has always been written on two levels, for the child and adult. We use parodies and celebrity segments to interest adults in the show because we know that a child learns best when co-viewing with a parent or care-giver. We also value our viewer’s opinions and particularly those of parents. In light of the feedback we’ve received on the Katy Perry music video which was released on YouTube only, we have decided we will not air the segment on the television broadcast of Sesame Street, which is aimed at preschoolers. Katy Perry fans will still be able to view the video on YouTube.[2]”

Despite saying the video would remain online, as of September 23, the video on Sesame Street's official YouTube channel has been "removed by the user." The video, however, remains on Perry's YouTube channel, "KatyPerryMusic". The statement from Sesame Workshop as posted on its official Facebook page replaces the YouTube reference with one to Katy Perry's official website.

Both Perry and her fiancé, Russell Brand, made light of the incident on their official Twitter accounts, with Perry commenting, "Wow, looks like my play date with Elmo has been cut short!"[3] and Brand quipping, "today's Sesame Street will NOT be brought to you by the number 34 or the letter D."[4]

In an interview on Good Morning America, Elmo told George Stephanopoulos that he wants to sing with Perry again, stating: "We’ll have another one. Elmo loves Ms. Katy and we had a good time, so we'll have another play date. Yes Miss Katy, come, come, come, come! We'll have another play date!" Writer Carol-Lynn Parente also commented that she was surprised at the controversy behind the video. Also on hand was Grover, who asked Stephanopoulos, "How do you like my new outfit, huh? It is not too revealing, is it?" Although pulled from air, the segment is still listed in the "Parodies" section of the official press kit.

Retrieved from "https://muppet.fandom.com/wiki/Hot_and_Cold?oldid=1378576"
Community content is available under CC-BY-SA unless otherwise noted.