How Now Brown appeared on Sesame Street as the leader of How Now Brown and the Moo Wave from Season 16, a parody of the then-current new-wave rock bands. His name is a spoof on the common vowel-rhyming phrase "How Now Brown Cow." His group performed two songs: "Danger's No Stranger" and "Wet Paint."

Spoofing on the current trend of 80s fashion, How Now Brown's flashy attire included a viking helmet, an earring on his left ear, an oversized red vest, and galoshes; the latter can be seen briefly in "Wet Paint," as he's dancing on a paint-smeared yellow tarp. He is also seen wearing a chroma-keyed vest (to portray himself shirtless and eventually covered in yellow paint) at the end of the song. Although he commonly held a small microphone in his left hand, it was rarely put to use.

In an MTV VJ parody intro used in initial airings of "Wet Paint," a Hot Pink Anything Muppet VJ of SMV (Sesame Music Video) mentions that How Now grew up on a farm outside of Tupelo, Mississippi and would sing while milking his cows, which is how he met the Moo Wave. They ventured to New York City, and made ends meet by selling an occasional quart of milk. 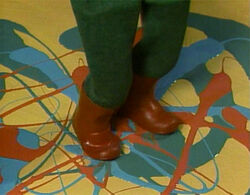 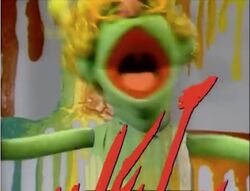 How Now Brown wearing a chroma-keyed vest at the end of "Wet Paint."
Add a photo to this gallery

Retrieved from "https://muppet.fandom.com/wiki/How_Now_Brown?oldid=1240686"
Community content is available under CC-BY-SA unless otherwise noted.