How to get to Sesame Street (rumor)

Sesame Street’s opening theme song asks the musical question that has been addressed many times: "Can you tell me how to get, how to get to Sesame Street?"

While it's established that the famous street is in New York City, the actual location of the street has been hinted at, but never confirmed.

In his 2011 book Memoirs of a Muppets Writer, Sesame Street scribe Joseph A. Bailey notes that the original set alludes to the film version of West Side Story (he notes that Sesame Street director Jon Stone was a big Stephen Sondheim fan), which is a West Side cul-de-sac modeled after the pre-Lincoln Center era of the 1950s.[1]

A backdrop used on the show as early as season 9[note 1] through season 29[note 2] indicates Sesame Street is at the intersection of E 104th St which runs south of East Harlem and north of the Upper East Side.

One possible means is through the Subway Station. In Christmas Eve on Sesame Street, the gang can be seen getting off on the 86th St. subway stop, which does exist on the 4, 5, and 6 trains of the Lexington Ave Line. This would place the neighborhood in the Upper East Side. Since Sesame Street is purportedly in New York, and according to the subway signs on the current set, the 1, 2, A, and B trains theoretically stop there (though in reality, there is no current station where all four lines connect).

The use of the subway is even acknowledged in the 1989 special Sesame Street: 20 Years and Still Counting. While roving reporter Kermit the Frog repeatedly asks people (and Muppets) how to get to Sesame Street, host Bill Cosby has a simple explanation: "I took the A train."

An alternative route was suggested in a 1972 episode of The Electric Company. According to Fargo North, a traveler can go to Vi's Diner (itself vaguely located) and wait for the No. 4 bus, which then goes directly to Sesame Street.

While singing the Sesame Street theme during the special Elmopalooza, Telly says he thinks Sesame Street is "that way", pointing to his right, camera left, while on stage. Based on the orientation of the stage within Radio City Music Hall, this would imply that Sesame Street is north of West 50th Street at the Avenue of the Americas. Of course, this is all dependent on Telly's directional sense within the building.

When there was a grease fire at Hooper's Store in 2001, the Engine Company 58/Ladder 26 extinguished it. They serve East Harlem, and the north end of Central Park.

In a piece filmed in 2014 for the reality show Oprah: Where Are They Now?, Ernie and Bert take a pedicab from, presumably, Sesame Street to Tavern on the Green in Central Park. Their total fare amounts to $57, which (depending on what types of blocks they used to get there) means the street is between 11 and 26 blocks away. The duo are also asked how to get to the street, though neither are sure how (nor are they sure how to get back when they hail the same pedicab). They do acknowledge it's in a city, in a state ("Or province," Bert adds), but definitely in the world.

A cityscape backdrop introduced in Season 46 adds to the ambiguity, in that it is comprised of photos from different New York City neighborhoods. A highly visible bridge in the arbor area is pieced together from three different bridges as well.[2]

The Muppets responded to the question in a 2017 video for Wired. Grover claims that the origin of departure (East or West) impacts how to get there. The Count says one takes the R train to Steinway, walks a block and arrives at the street, which also, in real life, can lead one to Kaufman Astoria Studios. Abby Cadabby claims to have an underground tunnel system that takes her right to her fairy garden. Cookie Monster simply recommends taking an Uber.

The 2017 TV special The Magical Wand Chase centers on Abby Cadabby and her friends getting lost in New York and having to find their way back to Sesame Street. One friend they meet, a young girl named Onyi, says she knows exactly where Sesame Street is and that she can take them there. Onyi's guidance is ultimately not needed however, as Abby uses her wand to wish them back home.

Elmo is confident that you cannot take an M train, contrary to Jarrod Fairclough's 2017 memory of his visit, on The Muppet Mindset (YouTube). That same year, Grover told Wired that the street was in the "sixth borough" (YouTube) (New York City only has five).

Appearing in a YouTube interview for NME in February 2018, Kermit says first you've got to cross the pond, get yourself to New York, "and then I think it's something about taking the R train? Yeah, to Steinway Street. That's what I do." Piggy reminds him that he hasn't done that in a while; Kermit agrees that it's been a long time.

In Sesame Street's 50th Anniversary Celebration, a Girl Scout in the park responds to Cookie Monster's request for directions: "Take the second right. Go around a traffic circle. Take the exit for Raisin Road, not Poppy. Merge left around the construction. Then straight till you see the sign for Hooper's Store."

Over the years, residents of Sesame Street have received letters and packages in the mail. The addresses are usually fairly nondescript, and have varied in each appearance. 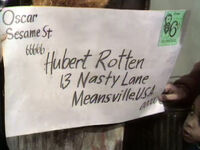 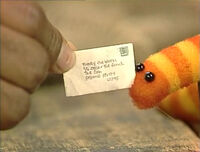 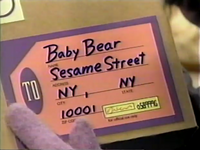 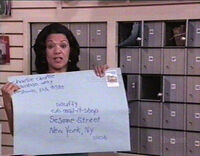 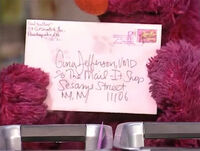 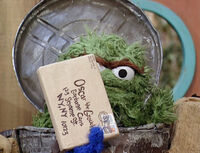 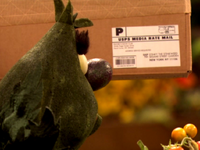 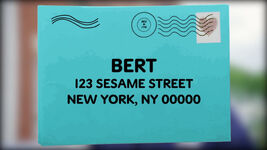 Sesame Street sometimes been depicted on a map or shown from an aerial view.

Gordon produces a map of "The Greater Sesame Street Area" in a 1990 episode. It shows that not only is Madison Square Garden (located at West 32nd Street in New York) west of 123 Sesame Street, but that Sesame Street itself connects to the venue.

In Episode 5029, characters use an old map of Sesame Street to find a hidden treasure. The map includes a compass with the cardinal directions, indicating that one would walk southeast (parallel to Manhattan's Streets) from the subway station past Hooper's store to the carriage house, then southwest (parallel to the Avenues) past 123 and Big Bird's nest.

In the Interactive Set Map on Sesamestreet.org, the following text accompanies the landmark star on the lampost:

“"Can you tell me how to get to Sesame Street?" You get there by going to Time Square, Manhattan, or anywhere you can pick up the local R train. Then hop on the subway and head east to Queens.”

In real life, these directions can be used to get to Kaufman Astoria Studios, which is where Sesame Street started taping in 1993.

On November 9, 2009, in honor of the 40th Anniversary, the city of New York temporarily renamed the corner of 64th and Broadway as 123 Sesame Street.[3]

In May 2019, 63rd Street (off of Broadway) in New York City was permanently renamed Sesame Street. During the naming ceremony, Sesame Workshop CEO Jeffery Dunn acknowledged the naming was a deliberate way of answering the lyrical question and celebrate the show's 50th anniversary.