Humpty Dumpty is one of the best known nursery rhymes. First published in 1803, it is thought that the original poem could have originated from the term "humpty dumpty," which was both a drink of brandy boiled with ale, or a short clumsy person. Typically portrayed as an egg, the character is not specifically referred to as such in the original text.

One of the most famous depictions of the poem appears in Lewis Carroll's Through the Looking Glass, where the egg discusses semantics with Alice. L. Frank Baum included the egg in his 1901 book Mother Goose in Prose, and the motif of "All the King's Horses" has been used in popular music, including songs by both The Monkees and Aretha Franklin.

Eggie from The Christmas Toy 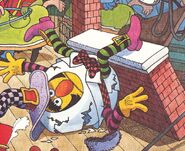 Rowlfy Woofy
Add a photo to this gallery

Wikipedia has an article related to:
Humpty Dumpty
Retrieved from "https://muppet.fandom.com/wiki/Humpty_Dumpty?oldid=1092316"
Community content is available under CC-BY-SA unless otherwise noted.