Mary Louise performs the song as the UK Spot on episode 108 of The Muppet Show. She is backed by a chorus of frogs that include Kermit and Robin, in his first appearance on the series.

While the frogs vary in color, only one of them appears to be blue. He does not appear to be the largest frog in the chorus. 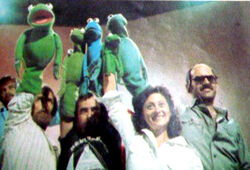 Behind the scenes of the Frog Chorus.
Add a photo to this gallery

Retrieved from "https://muppet.fandom.com/wiki/I%27m_in_Love_with_a_Big_Blue_Frog?oldid=1092618"
Community content is available under CC-BY-SA unless otherwise noted.