The iPogo is a high-tech brand of pogo stick, seen in Episode 4224 of Sesame Street, spoofing devices released by Apple.

Peddled by salesman Mack, the iPogo is said to much more than a regular pogo stick. Through the use of many "apps", the pogo-stick is able to take pictures, make phone calls, cool porridge, fix flat tires and make countdowns (among other things). The iPogo comes with an instruction manual, which resembles (and weighs as much as) a phone book. It features an automated voice (provided by Martin P. Robinson) that can say the name of its owner.

In the episode, Telly parts with his old, beloved pogo-stick for the iPogo, hoping he will be able to perform a perfect "Boingarooni" with it. Baby Bear helps, flipping through the manual, looking for an app to make it boing. Instead, they find the "Eject" button and the Milkshake maker. When they finally get a boing app, it bounces too slow, then when commanded to go faster, it makes him boing out of control. They find an app for make it do a "Boingarooni", but Telly is upset that the iPogo did it for him. Mack re-appears to give him the newest model, the "iPogo 300" (which bounces automatically), but Telly opts for his old pogo-stick instead. Soon after, Mack gets a call, stating a newer model (the "iPogo 3000") has just been released, which has apps for everything in the world, except boinging. 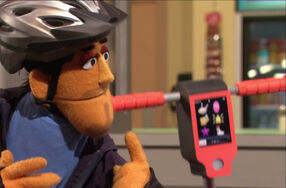 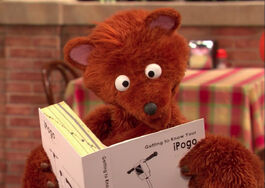 "Getting to Know Your iPogo" - the official product manual