"I Got You Babe" is a number-one hit single from 1965 that became the signature song for Sonny & Cher.

Lily Tomlin and Scred sang a duet of "I Got You Babe" in a Land of Gorch sketch on Saturday Night Live in 1975. At the end of the song, Scred performer Jerry Nelson surprised Lily with a rose.

Miss Piggy and Kermit the Frog performed "I Got You Babe" at the Hollywood Bowl in September 2006.

Bunsen and Beaker performed the song at karaoke in The Muppets episode "Pig Out." 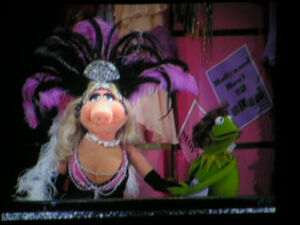 Kermit and Piggy at The Hollywood Bowl. 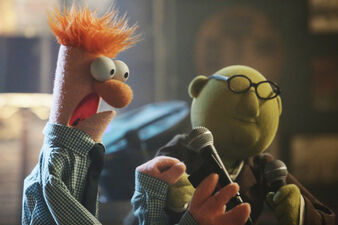 Bunsen and Beaker in The Muppets episode "Pig Out."
Add a photo to this gallery
Retrieved from "https://muppet.fandom.com/wiki/I_Got_You_Babe?oldid=1092412"
Community content is available under CC-BY-SA unless otherwise noted.