I Love Liberty was a special developed by Norman Lear for ABC, which aired on March 21, 1982. The show was produced by People for the American Way, a non-profit organization formed by Lear to combat the growing influence of right-wing religious groups. Big Bird appeared live on the show, introducing a pre-taped sketch by the Muppets about the Second Continental Congress.

The Paley Center for Media has this program in their archives, and the entire segment with the Muppets was released on YouTube by People for the American Way in 2008. 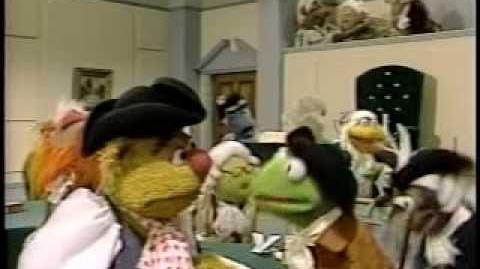 Billed as an all-star variety special saluting America in commemoration of the 250th anniversary of George Washington's birth, the show featured variety acts including Barbra Streisand singing "America the Beautiful" with the United States Air Force Band, Robin Williams doing a monologue as the American Flag, and a pre-taped Muppet sketch, introduced by Big Bird. The show was filmed at the Los Angeles Sports Arena, before an audience of 10,000 people.

In Big Bird's segment, the bird wanders onto the "theater in the round" stage, wearing his formal wear -- a black tie and shirt front, with white cuffs on his wrists. He calls out for the Muppets: "Kermit? Floyd? Fozzie? Hey, where are you guys? Miss Piggy? Animal? I'm looking for you... wow!"

Big Bird notices that he's walked on stage, and he looks around at the huge crowd. "Look at all these people!" he says. "Gee. Why, there must be thousands here! Maybe even hundreds! Who knows? Dozens may well be involved. Hmm. Kinda makes me want to give a speech." He clears his throat. "My friends -- on this great I Love Liberty occasion, it does my heart good to know that you are all pro-bird." (The crowd applauds.) "Now, I know that we have never had a president who is a bird... or have we?"

Then Martin Sheen's voice is heard over a loudspeaker: "Big Bird... Big Bird, can you hear me?" Big Bird looks around, bewildered: "Uh... yes, but I thought on the seventh day you rested!" Sheen walks onststage, and tells Big Bird that they're about to discuss turmoil. "Turmoil?" says the bird. "Is that anything like corn oil?" Sheen says that "turmoil is as American as Big Bird." When you have a democracy, turmoil goes with the territory, and turbulence, too. "Isn't that something to do with airplanes?" the bird asks. Sheen says that there was a lot of turmoil and turbulence in the Second Continental Congress -- but by the end, they had forged a Declaration of Independence. Big Bird exclaims, "Well, I do declare!"

The scene shifts to a set, where the Muppets are rehearsing their scene about the Second Continental Congress. There's the usual squabbling, clucking and paper airplane throwing as Kermit the Frog (playing Thomas Jefferson) tries to get the cast organized. Fozzie Bear, playing John Adams, is looking over his script: "Who wrote this? I don't understand these words." Kermit yells, "Quiet down, I think we can start the play."

Miss Piggy enters, in contemporary clothes, and coos at Kermit: "Darling, don't you look adorable as Thomas Jefferson!" She's confused about the play they're doing: "Even the title sounds weird. One thousand, seven hundred and seventy six?" Kermit explains that it's 1776, and the play takes place at the Second Continental Congress. Piggy asks, "What part does moi play?" Kermit says that there's no part for her, and pushes her towards the door. "There were no women at the Continental Congress?" Piggy asks. "No pigs!" says Kermit, and closes the door on her.

As Kermit begins the rehearsal, Fozzie complains that there's no jokes in his part. Gonzo, playing John Dickinson, also has script problems: "Shouldn't we do it like it really was? It's full of fighting, and arguing, and shouting -- it's chaos!" Kermit says, "The United States of America was founded in the midst of chaos!" "My kind of country!" grins Gonzo.

Rizzo (Thomson) introduces Scooter (Hancock), who opens the floor to debate on American independence. Fozzie declares that the situation with Great Britain has grown intolerable. Gonzo says that he has no objections to being part of the greatest empire on Earth, and sharing in its benefits.

Kermit tries to keep the scene moving, and Gonzo (as Dickinson) points out that they should take an example from a real patriot, like General Washington. Then Miss Piggy enters, dressed as Washington: "Did someone call for George Washington? I cannot tell a lie -- moi am here!" Kermit tells her that Washington wasn't at the Continental Congress -- he was preparing to go to Valley Forge. "Is that some kind of health spa?" Piggy asks, as Kermit slams the door on her again.

As the scene continues, Gonzo asks, "Gentlemen! Why do you listen to this incendiary man?" Fozzie and Gonzo argue, and start thrusting their canes at each other. The scene becomes chaotic. Floyd screams, "We will not be repressed!" Sam looks disgusted as paper airplanes fly by.

Fozzie, still battling with Gonzo, says, "Fie upon you, sir! Fie! Kermit! (Go away!) Kermit, are you sure the Continental Congress was really like this?" Kermit answers, "Well, actually, yes, it was."

Fozzie: "But where will it end?"
Kermit: "Well, in their case, it ended in the Declaration of Independence, and the founding of the United States of America."
Fozzie: "And in our case?"
Kermit: "What else? Song cue!"


The cast yells, "You're welcome!", and they go into a musical number -- "Brotherhood of Man," from How to Succeed in Business Without Really Trying.

Ernie and Bert march by playing a fife and drum, with Grover carrying the flag, a la Archibald Macneal Willard's painting "The Spirit of '76" (also known as "Yankee Doodle"). They're followed by a group of penguins and chickens, singing "When the Saints Go Marching In". Fozzie cries, "Modulate!", the cast merges the two songs, ending with a rousing final chorus of "Brotherhood of Man," with everyone waving flags with 13 stars.

As they reach the climax of the song -- "into a Brotherhood of Man!" -- Miss Piggy returns, dressed as the Statue of Liberty, to add "... and Women!" The Muppets bow as the audience applauds. 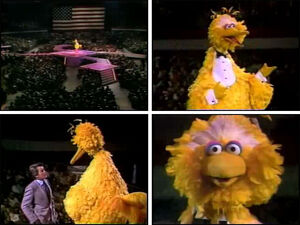 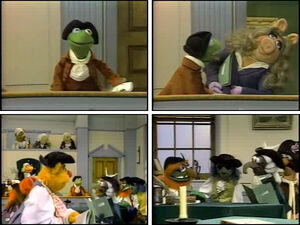 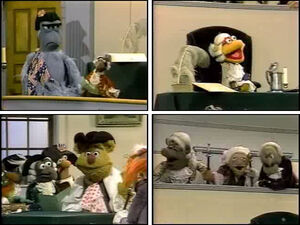 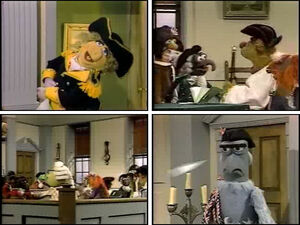 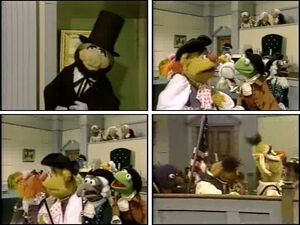 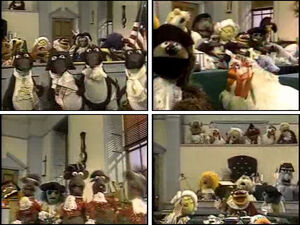 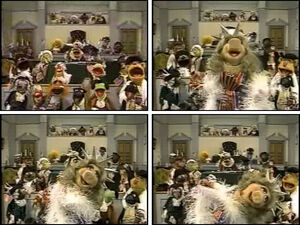 Writing credits for the Muppet segment were given to Jerry Juhl and Peter Stone (who wrote the book for the musical 1776), with the note that this was a "Jim Henson's Muppet segment based on the play 1776."[1]

“Although I Love Liberty has styled itself as a non-political and non-controversial salute to such American values as freedom, patriotism and tolerance, Moral Majority officials (who haven't yet seen the show) have already attacked it as a thinly veiled effort to promote Mr. Lear's liberal political views... In a typical segment, six actors appear on stage to articulate some of the complaints of ethnic and minority groups. 'I am an angry black,' says LeVar Burton, portraying a working-class black man, who is unhappy over the high unemployment rate. 'America hasn't worked that well for me,' he concludes, 'but I love my country.' He is followed by a Hispanic, an American Indian, a woman, a homosexual and a middle-class white male - all of whom tell why they are angry and why, despite dissatifactions, they still feel a strong allegiance to the United States... Discussing I Love Liberty in a recent interview, Mr. Lear said the special tries, in a similar way, to show that a diversity of viewpoints is part of the American tradition. 'This country has lived in turmoil, and our strength comes out of that turmoil,' he said. The show's patriotic theme, he added, is an effort to show that loving one's country is 'not the private province of the far right.'[2]”