"I Love My Hair" is a Sesame Street song performed by an Anything Muppet girl. She sings about how proud she is of her hair and the many ways she can wear it. The girl, later named "Segi", was voiced in the song by Chantylla Johnson and puppeteered by Kevin Clash.

The video was posted on Sesame Workshop's YouTube channel in October 2010, and quickly garnered online attention for its positive message.[1] Following the original debut of the segment, other airings feature a modified music track.

A new, bilingual version of the song ("Me Encanta Mi Cabello") was performed by Armando and Segi in Season 44. The segment was released online on October 10, 2013 and was televised with Episode 4413. Ismael Cruz Córdova, who portrays the character, re-wrote the song entirely in Spanish for his audition and the producers were so fond of it, they reworked it and incorporated it to the show.[2] Córdova performed the song on Good Morning America on May 10, 2013.

“My wife and I, we adopted our daughter from Ethiopia, so we're two white parents raising an African-American daughter. We knew issues of skin color would come up, and then hair came up a bit last year when she wasn't really loving her curls and wanted to have long, blonde, straight hair. She would put on wigs, she would want her hair like her mom's or a Barbie, and I thought maybe it was an issue because she was being raised by white parents and she sees us every day.

But then when Chris Rock's film Good Hair came out, I was talking to my executive producer about it and I realized, 'Oh, this is a bigger issue. This isn't just my child, it's [happening with other] African-American girls.' So I asked my executive producer, 'Hey, can I take a shot at writing something for this?' because we had finished our writing season and we were into shooting the show and we had nothing really left to write or even slots left to shoot it in. So I quickly sat down in my office and thought about what I say to my daughter, and we wrote this song... then I had to direct a day of inserts, and somewhere in between "The Closer" and "True Mud," we got to stick this in...

There was a piece on Diane Sawyer that had pretty much the only picture [of her] released, because I want to keep her away from the media, but her friends were saying, 'I saw you on TV last night!' So she thought that was cool, but I'm not letting her watch any of this yet. I'm asking our press department to put it on a DVD and when she gets older, I'm going to share it with her and show her how it took off on YouTube and stuff.[3]”

Mazzarino also stated he'd like to produce more segments similar to this, even using classic Sesame songs, such as "The Skin I'm In."[4] In a separate interview, Johnson's agent said talks were underway for further voice appearances, and Mazzarino suggested he'd like to continue working with the character.[5] The character returned the following season with a new song, "Change the World." By season 45, the little girl was named Segi and was a recurring character during the season. 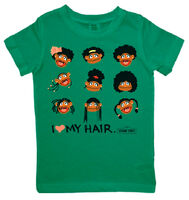 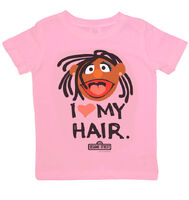 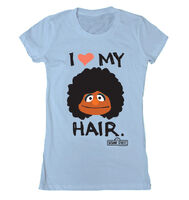 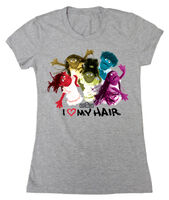 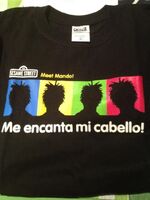 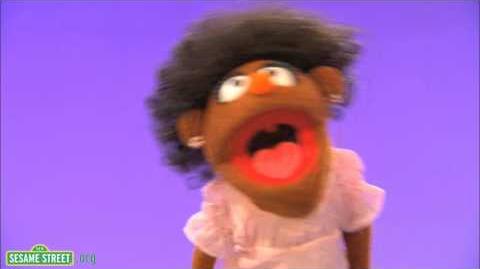 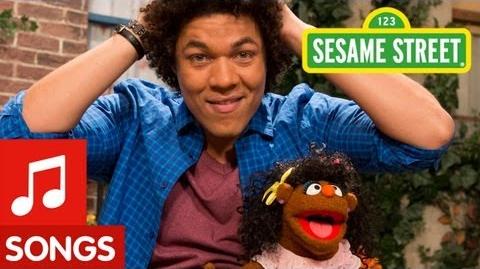 Retrieved from "https://muppet.fandom.com/wiki/I_Love_My_Hair?oldid=1229234"
Community content is available under CC-BY-SA unless otherwise noted.