"I Love Trash" is Oscar the Grouch's signature song. It was first performed on Sesame Street in season 1, and has been retaped several times as the Oscar puppet evolved.

Oscar lists off several special items in his trash collection that he admires; including a tattered and worn sneaker that was given to him by his mother, a 13-month-old newspaper with smelly, cold fish wrapped inside, a defective clock, an old telephone, a broken umbrella, and a rusty trombone. 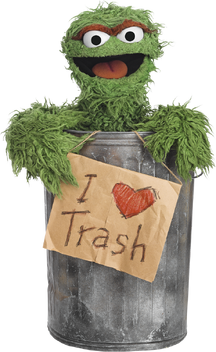 Retrieved from "https://muppet.fandom.com/wiki/I_Love_Trash?oldid=1302488"
Community content is available under CC-BY-SA unless otherwise noted.