I Think That It Is Wonderful is a collection of reflective, illustrated poems. The title poem is reworked from the song of the same name. Other poems, illustrated by the Sesame Street cast, include "The Strangest Word," "When My Imagination," "A Silly Mystery," "What Is a Song?" "Oh, I Was So Embarrassed!" "There Is a Road," "There Is a Place," "I've Been Wondering," "When You're New on the Street," "The Mirror Poem," and "So Many Things."

This book was also recorded for the Big Bird StoryMagic toy in 1987, two illustrations were cut from the book. 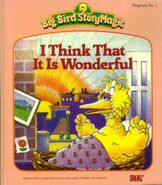 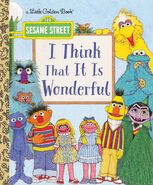 2018 reissue
Add a photo to this gallery
Retrieved from "https://muppet.fandom.com/wiki/I_Think_That_It_Is_Wonderful_(book)?oldid=1121859"
Community content is available under CC-BY-SA unless otherwise noted.