"I Want a Monster to Be My Friend" was written for the 1975 The Sesame Street Monsters! LP, issued as a single in 1976, and performed as an insert on Sesame Street. The singer, identified only as "A Little Girl" in the album notes, explains that she's tired of normal pets like "birds and fish and dogs and alley-cats," and that what she'd really like is to have a monster as a friend. After a sweet introductory verse, the girl (performed by Marilyn Sokol) belts out her desires in a deep, mock-burlesque growl:

The song echoes the recurring theme of The Sesame Street Monsters! album that monsters can be both scary and nice, and that it's possible to see both perspectives at the same time. The opening song on the album The Lovable Monsters of Sesame Street makes this clear as the growling, snarling monsters sing:

No, no, please don't go.
We won't eat you up, you know.
We are monsters, but we're sweet.
We're the lovable Monsters of Sesame Street.

Many of the monsters on the LP cover have fangs and dark, menacing eyebrows, and the young boy on the cover looks vaguely unsettled. "I Want a Monster to Be My Friend" plays with the apparent oxymoron of a friendly monster, in keeping with the rest of the album.

On Sesame Street, the Betty Lou puppet lip-synched to Sokol's vocal track, backed by three monsters on piano, saxophone, and tambourine. Two different takes of the segment aired on the show and as part of international co-productions. In 1981, the song was included in the second Sesame Street Live show, Big Bird's Super Spectacular Totally Amateur Show, sung by Prairie Dawn. This song was also included in the original release of Born to Add.

The song was removed from rotation on Sesame Street in 1984, after a mother complained about the song's bridge:

If I make friends with a friendly monster,
I'll let him bounce me on his knee.
I'll let him do whatever he wants ta,
Especially if he's bigger than me.

These lyrics, interpreted in an unwholesome way, could be seen as encouraging children to give in to physical demands made by adults. A New York Times article on April 9, 1984, summarized the situation:

“The monster song on the children's television program Sesame Street is about to lose four lines because of a mother who feared they would encourage child molestation. Marty Deming, a mother of two, objected to the lines. She said Edward L. Palmer, vice president of the Children's Television Workshop, told her Sesame Street will stop using the lines, even though the producers felt the song "has nothing to do with encouraging children to let real adult persons make improper advances on them."”

The song was omitted when The Sesame Street Monsters! album was re-released on audio cassette 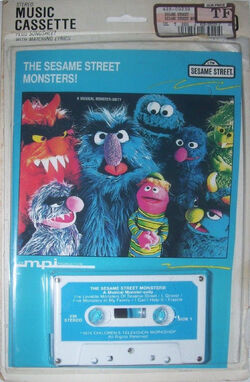 in 1988, and on CD as Monster Melodies in 1996; on the latter release, it was replaced by a Herry Monster song, "That Furry Blue Mommy of Mine". It was also not included in the 1993 reissue of Born to Add. However, it was included on the 1991 computer game, Numbers and in Plaza Sesamo Canta, a 1993 video release.

In 1998, the R&B vocal group En Vogue performed "I Want a Monster" on the Elmopalooza TV special. The performance was also included on the Elmopalooza! soundtrack. In this new version, the questionable lyrics were altered to:

If I make friends with a friendly monster,
I'd be the best that a friend could be.
I'd let him do whatever he wants to
And he'd always belong to me.

Despite the controversy, the original song has since been released on the digital download version of The Sesame Street Monsters! album.

Retrieved from "https://muppet.fandom.com/wiki/I_Want_a_Monster_to_Be_My_Friend?oldid=1344836"
Community content is available under CC-BY-SA unless otherwise noted.