InStyle is a monthly women's fashion magazine that was launched in 1993 in the United States. There are now several international versions, as well.

Jason Wu: a black feathered frock with a lace veil
Prabal Gurung: A belted dress in white duchesse silk. "I didn't want to dress Miss Piggy in anything that would take away from her bold personality so I went with a simple, classic dress and neutral color. The Empire waist really complements her figure."
Opening Ceremony
Suno
Brian Atwood: sandals to complement her hoofs
Giles & Brother

The UK edition, Style, published this spread for the February 5, 2012 issue 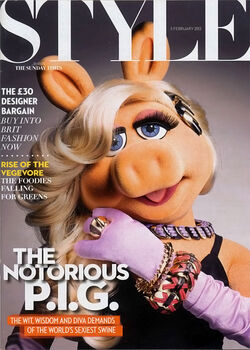 , timed for the British release of The Muppets.

Retrieved from "https://muppet.fandom.com/wiki/InStyle?oldid=1344919"
Community content is available under CC-BY-SA unless otherwise noted.