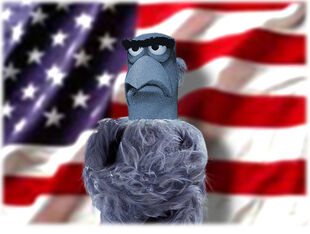 Independence Day, more commonly referred to as the Fourth of July, is a national holiday celebrating America's adoption of the Declaration of Independence on that day, and the subsequent break from England. The holiday is traditionally celebrated with fireworks, barbecues, patriotic pageantry, and screenings of such films as 1776. Patriotic icons such as George Washington, Uncle Sam, and the Statue of Liberty enjoy a resurgence during the holiday.

Wikipedia has an article related to:
Independence Day (United States)
Retrieved from "https://muppet.fandom.com/wiki/Independence_Day?oldid=1319471"
Community content is available under CC-BY-SA unless otherwise noted.