It was widely reported, starting in the spring of 2005, that Cookie Monster would suddenly be executing a complete about-face: espousing healthy eating and moderation, trading in his trademark "C is for Cookie" in favor of a new song, "A Cookie is a Sometime Food," and (depending on the source) even going on a diet. Some names rumored for the change included Veggie Monster, Broccoli Monster, and a variety of other vegetables to replace "Cookie."

Most of these reports came from various media outlets, but one of the earliest instances came directly from a Sesame Street character. When Grover appeared on Jimmy Kimmel Live in April of 2005 to promote the release of Happy Healthy Monsters on DVD, Kimmel told his guest that Cookie Monster was one of his favorites "guys" on the show and joked about his eating disorder. Grover replied, "It is true, he has a little bit of a cookie problem. But not anymore! No, he is on a diet. He's only eating healthy foods; yeah, fruits and vegetables... he's looking rather svelte now, too. He's lost about seventy pounds." After reactions from Kimmel and the audience, Grover backtracked slightly and added, "I think it is only temporary. But, you know, we're wishing the best for him."

However, outside of one performer's late night ad lib, these accounts (and the widespread uninformed outrage they spawned) were incorrect in a number of respects.

Brothers: "Are you going to use the Cookie Monster to teach children nutrition?"
Henson: "Well, we did a commercial for The Nutrition Council with Cookie Monster, mostly to offset all those cookies we forced down his throat!"

Sesame Street poked fun at the media firestorm in a 2006 episode. In a sketch in episode 4115, Matt Lauer of The Today Show confronts Cookie Monster about the rumors that he's giving up cookies and becoming a "Fruit Monster". Cookie Monster refutes the rumor, explaining that he eats the fruit first, and then has cookies for dessert. Cookie Monster also says that the media is always blowing things out of proportion.

Cookie Monster had another chance to publicly poke fun at the media when he made an appearance on Martha in October 2006. Martha Stewart spoke to him about eating healthily, catering to the section of the audience made up entirely of young kids. Cookie Monster agrees that he does like to eat healthily, and will eat just about anything. But he's not going to change his name to "Brussels Sprouts Monster," a comment which received a high amount of praise and applause from the adult audience.

On the June 19, 2008, episode of The Colbert Report, Stephen Colbert blamed fruit's dethroning of cookies as childrens' favorite snack food on Cookie Monster's abandonment of cookies and newfound love of fruit. Cookie Monster himself appears to explain to Colbert that he has not abandoned cookies, but rather learned to eat them as part of a balanced diet. Although he had many cookie-related episodes in the '70s and '80s- "Me like the Robert Downey Jr. of cookies"- he explained to Colbert that he always ate other food as well ("Me not picky").

During a New Jersey event in January 2009, Frank Oz fielded a question about Cookie Monster's shift in diet from a member of the audience. Oz replied that he didn't buy it, insisting that kids are smarter than to eat cookies for the rest of their life because they saw a character on TV who only eats cookies.

Cookie Monster responded to the rumor in a February 2010 tweet, stating, "Time to put end to rumors. YES, me eat vegetables. NO, not going to be called Vegetable Monster! Dis whole thing silly."[2] Cookie Monster tweeted about his healthy eating again in March 2010, stating, "Maybe you hear rumor that me going on a diet. Not true. Me just eating healthy foods AND cookies. What wrong with dat?"[3] In August 2010, Cookie posted a video on his official Facebook fan page saying that he eats three square meals a day, including many circular desserts. In September 2010, another video was posted, where Cookie names what he ate today: three varieties of cookies and tofu stir-fry. He adds, "What? You think cookie all me eat?"

In the 2010 video C is for Cookie Monster, Cookie answers a fan letter about his diet. He states that he eats cookies after fruits and veggies. This scene leads to some inserts involving Cookie Monster and healthy foods.

In a 2010 episode, a group of vegetables threaten to leave Sesame Street because they aren't treated well. One offender shown is Cookie, who eats piles of cookies instead of a plate of veggies. Chris convinces him to eat them by having him pretend that they're cookies. Afterward, Cookie states, "But remember, me not Veggie Monster. Me still Cookie Monster. Just for record. Me got reputation to think of."

In a Season 43 episode, Cookie Monster is offered vegetables to eat while waiting for a batch of cookies to finish baking. At every instance, Mario Lopez, appearing as a news reporter, claims that Cookie has become the Veggie Monster. Cookie sings "Me Am What Me Am" to explain that he is still Cookie Monster, even though he does love to occasionally eat vegetables. However, after Cookie eats part of the Sesame Street lamppost, Lopez comes back to report that Cookie is now "The Lamppost Monster."

Cookie Monster made a live appearance at the 2012 TEDMED conference in Washington, D.C. with ultramarathon runner champion Scott Jurek. They spoke at length about how eating more veggies and fewer cookies helps.

In a 2017 video for Wired, the Sesame Street Muppets respond to popular Internet questions about them and the show. Cookie Monster is naturally asked if he's become the Veggie Monster and becomes exasperated when the question comes up repeatedly.

A 2019 video for InStyle featuring the Sesame Street Muppets features Laura Brown speaking on the phone: "Rosie; yes, so it's Cookie Monster... no, no, no, the veggie thing was like a total misunderstanding." 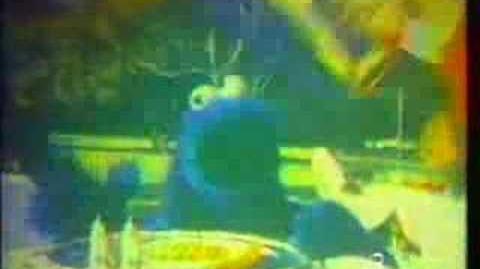 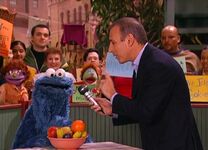 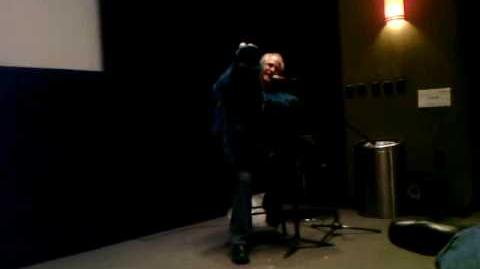 Internally, within Children's Television Workshop, references to a vegetable alternative to Cookie Monster can be found as far back as 1987. Interviewed for an article showcasing Sesame Street’s 19th season, producer Lisa Simon commented that "the show probably made a mistake in having a cookie monster." Erroneously citing the character's origins as Beautiful Day Monster, Simon continued, "We always say if we were doing the show for the first time now, he would probably be a vegetable monster. But, he's such a loveable character. We don't want to get rid of him now."[4]