It's Not Easy Being Green... and Other Things to Consider is a book collecting quotes from Jim Henson from throughout his career. Released on September 14th, 2005, the quotes are those of Jim's, his characters and his colleagues as well as song lyrics and script selections. The 208-page book is illustrated with drawings by Jim Henson, and edited by Cheryl Henson, who also wrote the introduction.

The material has been divided into 5 thematic sections: "Listen to Your Heart", "Dynamite Determination", "Together We'll Nab It", "It Starts When We're Kids", and "A Part of Everyone and Everything".

An audio book was released at the same time with narration by John Lithgow, Whoopi Goldberg, Jerry Nelson and an introduction by Cheryl Henson. It featured Jim Henson singing "Bein' Green" and "Rainbow Connection" as well as excerpts from the beginning of The Muppets on Puppets.

The book was the recipient of the Quill Book Award for "Health/Self Improvement" in 2005. 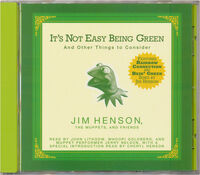 Retrieved from "https://muppet.fandom.com/wiki/It%27s_Not_Easy_Being_Green_(book)?oldid=1262067"
Community content is available under CC-BY-SA unless otherwise noted.