It's the Muppets!: Meet the Muppets! is a compilation video of some of the best clips from The Muppet Show, released by Jim Henson Video in 1993. A similar video, More Muppets, Please!, was also released simultaneously.

Unlike the Playhouse Videos, these videos don't have any guests star clips or new footage.

The UK release of this video has more sketches than the American release. 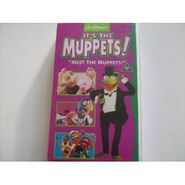 UK release
Add a photo to this gallery

Retrieved from "https://muppet.fandom.com/wiki/It%27s_the_Muppets!:_Meet_the_Muppets!?oldid=1341743"
Community content is available under CC-BY-SA unless otherwise noted.