Jack Be Nimble is a nursery rhyme character, famed for his prowess at leaping over candlesticks. He appears in a Sesame Street News Flash sketch, where he is portrayed as a hippie who does not know what "over" means, instead going under and around the candlestick.

Jack finally jumps over the candle stick (and thereupon remarks that he broke every bone in his body). He contemplates suing Mother Goose after what happened, but is interested when a cow tells him that he should jump over the moon sometime if he thinks that simply jumping over a candlestick is so painful.

Many years later, in a 1993 episode, Jack goes to Finders Keepers to find something new to jump over. The puppet's design is exactly the same as the one featured in the News Flash segment, from his hair and clothes to his hipster talk.

Prairie Dawn interviewed Jack in a segment for Nursery Rhyme News, but he doesn't have the energy to jump over his candlestick. He tells her, "Jack be tired, and Jack be slow, so back to bed Jack must go." Prairie Dawn discovers he did not eat Breakfast, and she tells him of the importance of a healthy Breakfast. He calls for his Mother, Mom Be Nimble, to bring him breakfast, which fills him with enough energy to not only jump over his candlestick, but Prairie Dawn as well. Here, he was performed by Joey Mazzarino.

Jack would reappear in Episode 4204, where he had to jump over 8 candlesticks. His appearance looks similar to the appearance in Nursery Rhyme News, and was again performed by Joey Mazzarino. 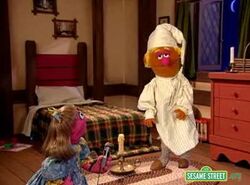 Jack in Episode 4204
Add a photo to this gallery
Retrieved from "https://muppet.fandom.com/wiki/Jack_Be_Nimble_(Sesame_Street)?oldid=1093084"
Community content is available under CC-BY-SA unless otherwise noted.