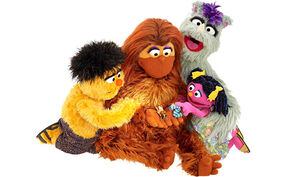 The main Muppet characters include Momon (a five year old monster) and Putri (a 3 1/2 year-old girl), along with Tantan (the wise female orangutan who settles disputes and acts as a mother figure) and baby rhinoceros Jabrik. Elmo joined the cast in the third season, while James Bond spoof Agen Rahasia 123 stars in his own segment.

Jalan Sesama features stories, songs and music in the Indonesian language. As with most co-productions, it takes place in a locale specific to the country, in this case an Indian village. "We want to raise local cultural values, which in the cities are often no longer held, such as gotong royong," said Mohammad Zuhdi, the research director of Indonesia's PSI Studio Center, initially announced as the show's co-producer along with the Sesame Workshop.[4]

The program started filming in May 2007 and was originally contracted to run until 2010. Content came from Indonesian company Creative Indigo Productions collaborated with Sesame Workshop to produce three seasons -- or 156 half-hour episodes -- which aired throughout Indonesia.[5]

Initial plans discussed whether the program would introduce other world cultures, such as American culture. "But it must not in the beginning of the program. We will concentrate on local content in the initial program," said Sesame Street Indonesia's research and education director Muhammad Zuhdi, who is also a lecturer at Syarif Hidayatullah State Islamic University.[2]

Jalan Sesama, like the US Sesame Street, does not have commercial breaks in the middle of the programs.[3] A magazine, Majalah Jalan Sesama, published by Gramedia Publishing was sold on newsstands beginning in April 2008.[1]

An Indonesian package, called Boneka Sesame, had previously aired in the country, using the Open Sesame format of simply redubbing selected US segments (with no new Muppets or frame scenes).

In March 2006, U.S. Secretary of State Condoleezza Rice announced a new U.S.-sponsored Indonesian Sesame Street program to teachers and students, then titled Sesame Indonesia.[6] The Secretary of State made an announcement that the United States will donate US$8.5 million to help Indonesia to develop the TV program.[7]

“And so it's really exciting for me to be here in Indonesia. I'm very glad that the United States and Indonesia have joined in this partnership for this wonderful school. It is a part of an initiative that President Bush announced when he was in Indonesia two years ago. And today we are announcing $8.5 million for a program to bring Sesame Street to the schools of Indonesia.”
—Condoleezza Rice[9]

At a May 22 press conference on the set of "Jalan Sesama" - the new Indonesian version of Sesame Street - US Charge d'Affaires John Heffern and USAID Mission Director Bill Frej introduced 4 new Indonesian Muppets and marked the first day of production for the show.[11]

An initial plan was also for several Muppets to wear Islamic veils as part of Dr. Rice's broader message that Western culture can co-exist peacefully with moderate Islam.[12]

'Where is Pak Dalang?'

'Welcome to Jalan Sesama'
Add a photo to this gallery

'Putri dan Hewan Peliharaan'
Add a photo to this gallery

Children sing along with two puppets at the Jalan Sesama, the Indonesian version of Sesame Street© AFP Bay Ismoyo

USAID/Indonesia Mission Director Bill Frej(left) with US Charge d’Affaires John Heffern (right) talk with Jalan Sesama character Momon (second left) and Putri (second right). The cast of the the Indonesian version of Sesame Street were introduced in Jakarta on Tuesday (5/22/2007)

Two characters of the Indonesian version of 'Sesame Street', Momon (left) and Putri (right), in an episode being produced in Jakarta. Momon is a 5-year-old boy who enjoys reading and drawing, but still learning his math. Putri is a 3,5-year-old pony-tailed girl who loves a good adventure.

Retrieved from "https://muppet.fandom.com/wiki/Jalan_Sesama?oldid=1289116"
Community content is available under CC-BY-SA unless otherwise noted.