"Jambalaya", sometimes called "Jambalaya (On the Bayou)", was a country and pop hit for Hank Williams, who is also credited as the sole author. Some baby seals and penguins, billed as "The Endangered Species Chorus Line", sing the song for the opening number in episode 501 of The Muppet Show.

Catgut, one of the star animals from the 1972 special The Muppet Musicians of Bremen, makes a cameo appearance in this number, fishing through a hole in the ice. Catgut catches a crocodile, who drags her under. 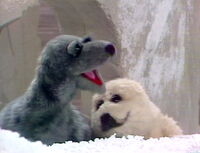 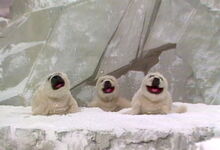 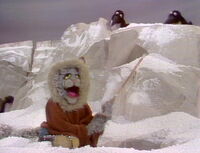 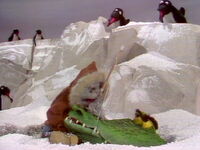 Add a photo to this gallery
Wikipedia has an article related to:
Jambalaya (song)
Retrieved from "https://muppet.fandom.com/wiki/Jambalaya?oldid=1093113"
Community content is available under CC-BY-SA unless otherwise noted.