He won the 1999 Academy Award for Best Supporting Actor for his work in Affliction. 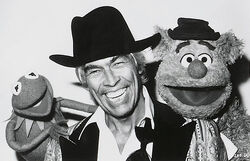 Coburn on the set of The Muppet Movie

Wikipedia has an article related to:
James Coburn
Community content is available under CC-BY-SA unless otherwise noted.
Advertisement