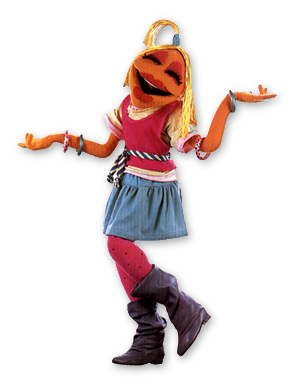 Janice is the lead guitar player in The Electric Mayhem on The Muppet Show. She also portrays Nurse Janice in Veterinarian's Hospital, and appears in various other sketches, frequently as a chorus member. She is occasionally seen in the orchestra during the fifth season of the show. She has a very close relationship with the Electric Mayhem's bass player, Floyd Pepper (although, in the first season of The Muppet Show, she's involved with Zoot in the At the Dance sketch).

In addition to the guitar, Janice has also played the tambourine with the Mayhem, and the trumpet or trombone with the orchestra. In personality, Janice is generally laid-back, noted for her Valley girl "Fer sure" and "Rully" dialogue and behavior (such as tanning herself in The Great Muppet Caper). Twice in the Muppet movies, when caught short during a loud and confusing group discussion, Janice has inadvertently revealed her attitudes towards nudity. In The Great Muppet Caper, she's interrupted while justifying a willingness to walk along the beach naked to her mother, while in The Muppets Take Manhattan, she claims that she doesn't pose naked, "even if it is artistic." Janice also has an affinity for baking, at least during the holidays: in A Muppet Family Christmas, she makes Christmas cookies that are eaten by Cookie Monster, while she brings cupcakes to the party in A Muppets Christmas: Letters to Santa. She lists Tina Turner and Joan Jett among her musical influences, and Weezer and OK Go as some of her favorite current bands.[1]

Michael Frith's original sketch of the character indicates that she was intended to be a male character, a takeoff on Mick Jagger's emaciated frame and prominent lips. Her name is probably a reference to Janis Joplin. However, in her final form as built by Bonnie Erickson, she bears very little resemblance to either Jagger or Joplin.

In an August 27, 2015 tweet, @ElectricMayhem revealed a never before known fact about Janice's family, "Janice truly is a flower child. Her mom's name was Daisy!" [1]

Retrieved from "https://muppet.fandom.com/wiki/Janice?oldid=1304632"
Community content is available under CC-BY-SA unless otherwise noted.