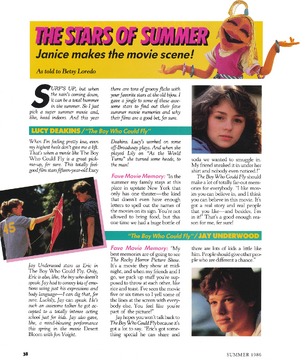 Jay Underwood (b. 1968) is an actor who has appeared in such films as The Boy Who Could Fly (with Mindy Cohn) and Uncle Buck (with John Candy), and made guest appearances on television shows such as Star Trek: Voyager, The West Wing, and The Young Indiana Jones Chronicles.

Underwood was interviewed by Janice in Muppet Magazine issue 15 to promote his upcoming film, The Boy Who Could Fly.

Wikipedia has an article related to:
Jay Underwood
Retrieved from "https://muppet.fandom.com/wiki/Jay_Underwood?oldid=1072096"
Community content is available under CC-BY-SA unless otherwise noted.