Jesse Tyler Ferguson (b. 1975) is an American actor best known for his role of Mitchell Pritchett on the ABC sitcom Modern Family.

Ferguson appeared on Sesame Street to explain the word "fragile" in a Season 42 Word of the Day segment.

On Broadway, Ferguson originated the role of Leaf Coneybear in The 25th Annual Putnam County Spelling Bee and also appeared in the 1998 revival of On the Town. Other stage credits include Hair, A Midsummer Night's Dream, and The Merchant of Venice. Television credits include Ugly Betty, The Class and Do Not Disturb. 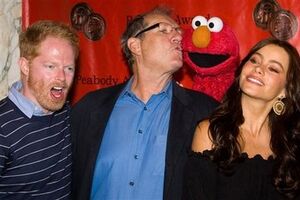 Ferguson and the cast of Modern Family with Elmo at the 2010 Peabody Awards.

Wikipedia has an article related to:
Jesse Tyler Ferguson
Community content is available under CC-BY-SA unless otherwise noted.
Advertisement