for other uses, see Jill (disambiguation)

Jill is a long-haired, female frog, one of a trio of Mad Ave Advertising executives who work on the Ocean Breeze Soap account in The Muppets Take Manhattan. Jill and her colleagues, Bill and Gil, recruit the amnesiac Kermit to work with them after he comes up with the brilliant slogan, "Ocean Breeze Soap will get you clean." They also have a habit of using words that rhyme with their names.

In Manhattan Melodies, the Broadway musical that the Muppets stage at the end of The Muppets Take Manhattan, Jill plays several small parts, including the salesgirl at the bridal shop where Janice, Camilla and Yolanda Rat bring Miss Piggy to look for a wedding dress.

Jill has since made several background appearances in Muppet productions. In a series of National Wildlife Federation PSAs, Jill and her two partners run another ad agency, aptly named "Frog Frog & Frog Advertising." Later she, Bill, and Gil appeared as bosses in the Muppet RaceMania video game, and she also appeared as one of the members for The All Amphibian Band for Kermit and Jimmy Buffett's duet of "Caribbean Amphibian" from Elmopalooza. 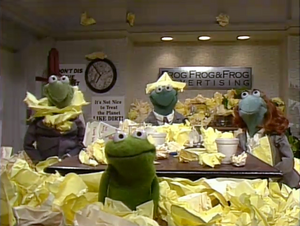 Jill in a NWF PSA with Bill, Gil and Robin
Add a photo to this gallery

Retrieved from "https://muppet.fandom.com/wiki/Jill?oldid=1106641"
Community content is available under CC-BY-SA unless otherwise noted.