Jim is the banjo player for the Country Trio, a Muppet band that performed in variety show appearances in the mid 70s, and occasionally on The Muppet Show. Jim, and his fellow Trio members Frank, and Jerry, are based on their respective performers. Bonnie Erickson, who designed all three and and built Jim and Frank, said that "[the puppets] are dressed that way, because that's how [Jim, Frank, and Jerry] dressed then."[1]

They were created for an appearance on The Perry Como Winter Show in 1972, where they sang "You Don't Mess Around with Jim." The group next appeared on The Dick Cavett Show in 1973, singing "Mama Don't Allow." During the latter appearance, the members of the Trio addressed each other as "Jim," "Frank," and "Jerry."

On The Muppet Show, the Trio has performed "Tomorrow," "In the Summertime," and "A Four-Legged Friend." Jim also sat in with The Electric Mayhem during the closing credits of The Muppet Show: Sex and Violence.

Jim has been immortalized in action figure form. 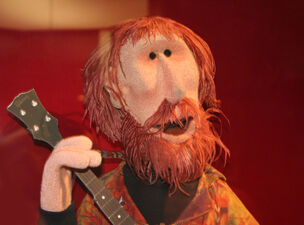 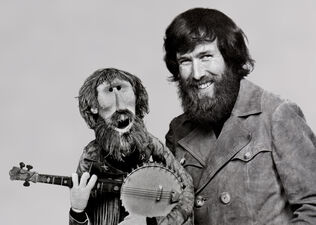