Jim Hawkins is the human protagonist of Muppet Treasure Island. An orphan, Hawkins has been working as a kitchen servant/waiter at the Benbow Inn run by Mrs. Bluveridge, alongside his friends Gonzo and Rizzo the Rat. Following the death of Billy Bones, however, Hawkins decides to seek his fortune as a sailor, following in the footsteps of his dead father. Jim Hawkins is brave and kind, but also naive, a point used against him by Long John Silver. 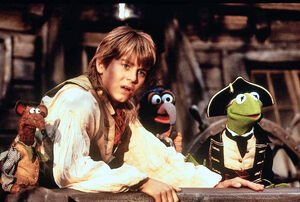 Jim Hawkins with Rizzo, Gonzo, and Captain Smollett
Add a photo to this gallery

Retrieved from "https://muppet.fandom.com/wiki/Jim_Hawkins?oldid=1093212"
Community content is available under CC-BY-SA unless otherwise noted.