Jim Henson: The Biography is an upcoming biography of Jim Henson written by Brian Jay Jones. The 672-page hardcover book will be released on September 24, 2013 (Henson's 77th birthday); a digital e-book edition will also be released the same day. The book is being published by Random House / Ballantine Books.

An audiobook, narrated by Kirby Heyborne, will also be released by Random House Audio on September 24th.

It was first reported in July 2010 that Brian Jay Jones had sold a biography of Jim Henson to Ballantine Books. Jones worked on the project with the blessing of the Henson family and the Jim Henson Legacy. From 2010 to 2012, he spent time combing through the Henson Archives with the assistance of Karen Falk.[2] Jones also spent time interviewing many of Henson's colleagues for the book — including Jane Henson, Steve Whitmire, Dave Goelz, and Jerry Nelson, among others.[3][4][5] Jones delivered the first draft of the manuscript to his editor in June 2012; the draft was 700-pages long.[6] After being typeset and laid out, the final book will be 592-pages[7]. 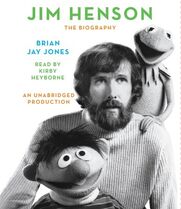 - Larry Tye, author of Satchel: The Life and Times of an American Legend and Superman: The High-Flying History of America's Most Enduring Hero[14]