Jim Henson: The Guy Who Played with Puppets

Jim Henson: The Guy Who Played with Puppets is a 2011 biography for children (ages 4-8) about the life and work of Jim Henson; it was released as a 40-page hardcover book.

Provided by the publisher:

“Sesame Street and The Muppet Show introduced Jim Henson's Muppets to the world, making Kermit the Frog, Oscar the Grouch, Big Bird, and Cookie Monster household names. But even as a child in rural Mississippi, listening to the radio and putting on comedy shows for his family, Jim had recognized the power of laughter to bring people together. On Sesame Street, Jim's Muppets transformed children's television by making learning fun for kids everywhere. A visionary in his field, Jim always believed that puppets could reach a wider audience. In 1976, he proved it, drawing millions of family viewers worldwide to The Muppet Show. With his feature film The Dark Crystal and his Star Wars characters — including Yoda — Jim continued to push the boundaries of what was possible in puppetry until his death in 1990, at the age of fifty-three.” 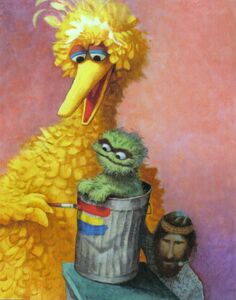 A factually misleading illustration of Henson puppeteering Oscar, depicting a behind-the-scenes look of this photo 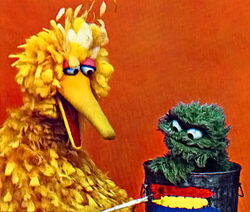