Jim Henson Video was a video label distributed by Buena Vista Home Video, which released a variety of Jim Henson productions on video from 1993 to 1996. The distribution deal was first announced on December 19, 1991.[1] The first set of titles were released on January 29, 1993.[2]

It's the Muppets: More Muppets, Please!

The Tale of the Bunny Picnic

Muppet Sing Alongs: It's Not Easy Being Green

Muppet Babies: Be My Valentine

Muppet Babies: Explore With Us

Yes, I Can Be a Friend

Yes, I Can Help

Yes, I Can Learn

For a limited time, a free Muppet watch was offered with each The Muppet Movie and The Great Muppet Caper video. In the mid-1990s, Henson video titles were promoted alongside other Walt Disney/Buena Vista releases in holiday-themed "video shop" trade advertisements.

Colouring and Activity Booklet from Japan.

In the United Kingdom, Disney Videos advertised other Jim Henson/Disney video releases on the back of the video sleeves. In some of the Muppet videos, a flyer was included to promote a free Muppet Music Sampler audio cassette. For a time, Disney's U.K. home video unit also released a line of Sesame Street videos, separate from the Henson brand. 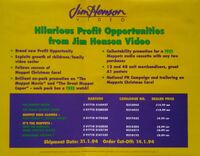 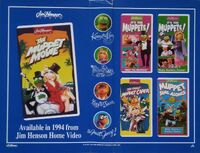 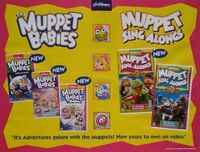 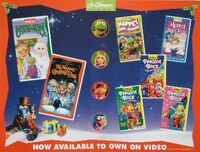 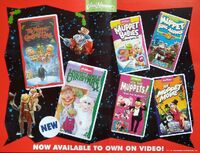 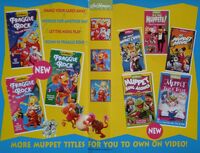 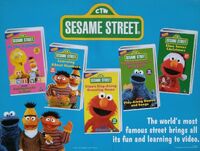 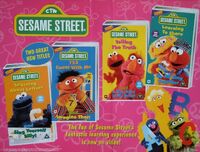 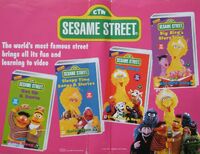 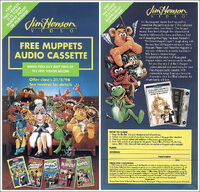 A "Jim Henson Video" logo card was used in advertisements and was seen at the close of several video releases, notably replacing the end credit Henson logo on most Muppet Babies videos. An animated variant, with the "Jim Henson" signature writing itself onscreen, was rarely used in American releases. Nearly every video featured the animated "Jim Henson Productions" sequence that was introduced in The Muppet Christmas Carol at the start of each program.

Logo with the byline "Distributed by Buena Vista Home Video"