Jimmy Fallon (b. 1974) is an American comedian, actor, musician, and host of NBC's The Tonight Show. He is also known for his work on Saturday Night Live and as host of Late Night with Jimmy Fallon.

Muppets have appeared on Fallon's late night talk shows many times, including as the final musical guest on Late Night performing "The Weight" with Fallon.

Fallon appeared in two Sesame Street episodes in 2009, during the 40th season. In episode 4190, Fallon played "Wild Nature Survivor Guy", trying to survive alone in the wild even though he's in the middle of the city with a bunch of people. Fallon also appeared in episode 4205, learning about the word "inspect" with Elmo.

On the March 4, 2009 episode of his talk show, Fallon talked with Cameron Diaz about their visits to the Sesame Street set. Diaz mentioned that everyone on the set loved Fallon, while Fallon expressed his admiration for the puppeteers.

On June 8, 2010, he appeared on Today alongside Frank Oz and Meredith Vieira to unveil the Muppet Pipes as part of the NBC studio tour. Fallon had petitioned NBC executives to put the pipes behind glass and add them to the tour when he took over Late Night from Conan O'Brien, as they had previously been hidden in a closet in Max Weinberg's dressing room.

Fallon appears as a guest on The Not-Too-Late Show with Elmo in 2020. 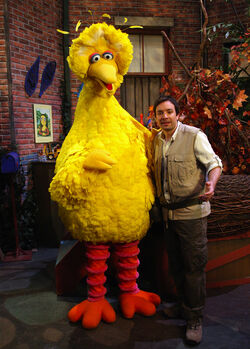 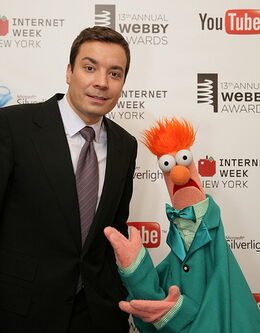 Fallon with Beaker at the 2009 Webby Awards ceremony.
Add a photo to this gallery

Wikipedia has an article related to:
Jimmy Fallon
Retrieved from "https://muppet.fandom.com/wiki/Jimmy_Fallon?oldid=1280372"
Community content is available under CC-BY-SA unless otherwise noted.