Joe Torre (b. 1940) was the manager of the New York Yankees baseball team from 1996 to 2007 and a former Major League ball player himself.

In a 2005 episode of Sesame Street, Baby Bear enlists Torre to encourage Telly Monster, frustrated by his inability to catch the ball.

Torre also appeared with his 9-year old daughter, Andrea, and Elmo in a "Healthy Habits for Life" segment. 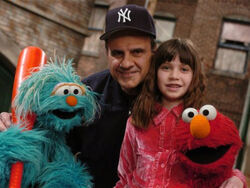 Joe Torre with Rosita, daughter Andrea, and Elmo
Add a photo to this gallery
Wikipedia has an article related to:
Joe Torre
Retrieved from "https://muppet.fandom.com/wiki/Joe_Torre?oldid=1072332"
Community content is available under CC-BY-SA unless otherwise noted.