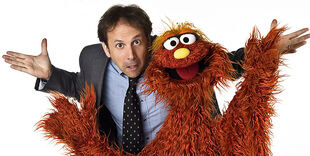 Joseph "Joey" Mazzarino (b. June 4, 1968) started as a puppeteer on Sesame Street in 1989 and then joined the show's writing staff in 1991. He wrote his first sketch, the Columbo parody "Colambo," as an audition piece, and soon found himself cast in the title role. Mazzarino additionally became involved as a series director, and the head writer from 2009 until his departure in 2015.

With an inclination toward ad-libbing and a reputation as a cut-up on set, Mazzarino became a prominent player in the Sesame Street cast. His recurring characters included Murray Monster, Stinky the Stinkweed, Papa Bear, and the boisterous, tutu-wearing Elephant. In 2001, he took over the left head of the Two-Headed Monster.

Mazzarino has won multiple Daytime Emmy Awards with the Sesame Street writing and directing teams, and he received his first nomination for Outstanding Performer in a Children's Series in 2010. He shared the honor that year with frequent winner Kevin Clash, and he was nominated in the category for three more consecutive years ending in 2015.

Mazzarino has also written for Bear in the Big Blue House, and co-wrote the screenplays for The Adventures of Elmo in Grouchland, Muppets from Space and Kermit's Swamp Years. His non-Muppet writing credits include The Upside Down Show, Nature Cat, Donkey Hodie, and Cyberchase (for which he also supplied voices in the pilot episode). His collaborations with former Sesame Street writer Mo Willems include writing and voice-acting for Sheep in the Big City, and the HBO Max special Don't Let The Pigeon Do Storytime (performing a puppet version of Willems' Pigeon character).

Mazzarino is married to actress Kerry Butler who has appeared on Sesame Street as Ms. Camp, the letter carrier. They have a daughter named Segi, who was the inspiration for the song "I Love My Hair" and the namesake of a Muppet character.

In September 2015, Mazzarino announced on his Facebook page that he had left his position on Sesame Street; season 46 had been recorded prior to his departure. He since worked on the Jim Henson Company production, Julie's Greenroom, as a writer and director. Mazzarino also participated in the 2018 Puppets for Puppetry event honoring Caroll Spinney, performing a Muppet version of Bozo the Clown. In 2021, he returned to script the Sesame Workshop Benefit Gala.