John Eccleston is a British puppeteer who has performed on such shows as The Animal Show and Farscape for the Jim Henson Company.

Eccleston was a presenter for the British programs The Disney Club and Get the Picture, and was co-creator, along with Darryl Worbey and Don Austen, of the British puppet show The Leprechauns. 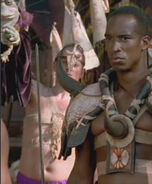 John Eccleston with Rygel, in the episode "Jeremiah Crichton"

Retrieved from "https://muppet.fandom.com/wiki/John_Eccleston?oldid=1072396"
Community content is available under CC-BY-SA unless otherwise noted.