Sir John Gielgud (1904-2000) was an acclaimed Shakespearean actor who also amassed many film credits, notably Hobson the butler opposite Dudley Moore in Arthur, for which he received an Academy Award for Best Supporting Actor. He appeared in two Creature Shop miniseries, as the professor of sunlight in Gulliver's Travels and King Constant in Merlin.

The actor was spoofed on Sesame Street in Season 24 with a Muppet actor named Sir John Feelgood, who taught people how to pretend. 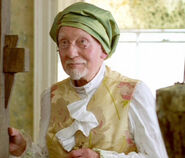 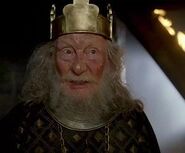 MerlinKing Constant
Add a photo to this gallery

Wikipedia has an article related to:
John Gielgud
Retrieved from "https://muppet.fandom.com/wiki/John_Gielgud?oldid=1315158"
Community content is available under CC-BY-SA unless otherwise noted.