John Gurney, sometimes credited as John Steven Gurney, is an illustrator whose art adorned the "Kermit's Tales" stories included in the Jim Henson's Bedtime Stories story-by-mail subscription series, and reprinted in the Jim Henson's Muppet Stories book series. Since the stories focus on various woodland animal characters or anthropomorphic entities (the sun, trees), Gurney's illustrations are in a style distinct from the normal Muppet look, presenting more realistic woodland animals in the manner of Beatrix Potter tales and similar storybooks. Frogs and insects are a bit more Muppety. Gurney illustrated 41 stories in all, as well as related activity pages.

Gurney's work has appeared in Highlights magazine, Cricket, and on board games (such as Guess Who?) He has illustrated several book series, including The A to Z Mysteries, The Bailey School Kids, and The Calendar Mysteries. Picture book assignments include an adaptation of The Night Before Christmas (1999; reissued in 2006 as a book and audio set narrated by Peter Linz). He has written and illustrated his own books, Dinosaur Train (2002; no relation) and Fuzzy Baseball (2016). 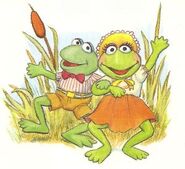 Thomas and Lolly, more Muppety frogs, in "Doubting Thomas"
Add a photo to this gallery

Retrieved from "https://muppet.fandom.com/wiki/John_Gurney?oldid=1222213"
Community content is available under CC-BY-SA unless otherwise noted.