John Burke Krasinski (b. 1979) is an American actor. He is best known for his role as Jim Halpert in the NBC comedy The Office.

Krasinski appeared on Sesame Street to explain the word "soggy" with Murray Monster in a Season 42 Word of the Day segment. He also makes an appearance in the 2011 film The Muppets. 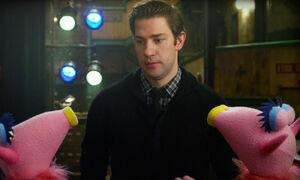 December 10, 2019 - In a tweet on Pepe the King Prawn's Twitter, Pepe ask Krasinski and Dwayne "The Rock Johnson" to quit while their ahead, so he can have his shot at action movie stardom.

Wikipedia has an article related to:
John Krasinski
Retrieved from "https://muppet.fandom.com/wiki/John_Krasinski?oldid=1272407"
Community content is available under CC-BY-SA unless otherwise noted.