John Legend (b. 1978), born John Stephens, is an R&B singer and pianist who made his first Sesame Street guest appearance in Season 37. In episode 4109, he performed "It Feels Good When You Sing a Song" with Hoots the Owl, supplying both vocals and piano accompaniment. Legend appeared in another guest spot in Season 48, performing "Come Together" with the Muppets.

Legend has also performed at the Annual Sesame Workshop Benefit Gala in 2010 and 2019. On both occasions, he appeared with Chrissy Teigen, whom he married in 2013.

During his appearance on The Queen Latifah Show in 2014, he played the piano to and sang "Rainbow Connection" with Queen Latifah, Kermit the Frog and Miss Piggy. 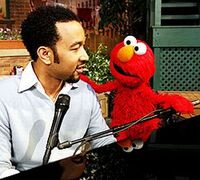 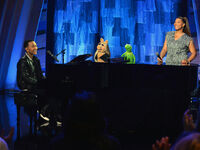 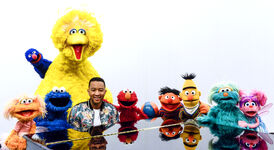 Wikipedia has an article related to:
John Legend
Retrieved from "https://muppet.fandom.com/wiki/John_Legend?oldid=1245940"
Community content is available under CC-BY-SA unless otherwise noted.