John McEnery (1943-2019) was an actor who played Polydektes in The StoryTeller: Greek Myths episode "Perseus and the Gorgon." He also played Lord Ardente in the Creature Shop-effects film Merlin.

Stage trained in Shakespeare and his ilk at the Old Vic Theatre School, McEnery made his film debut in ensemble roles in Othello (with Laurence Olivier). After a small role in Franco Zefferelli's TV version of Much Ado About Nothing (with the cast reprising stage parts), he played Mercutio in Zeffereli's Romeo and Juliet. More supporting parts followed (Nickolas and Alexandra, Ridley Scott's The Duellists) along with occasional leads. He was the title character in Bartleby (1970, opposite Paul Scofield) and enjoyed second billing in The Land That Time Forgot (as a WWI German submarine captain battling dinosaurs). On TV during the sixties and 70s, he played love interest Konrad in the period TV serial The Song of Songs and starred as John Rokesmith in Our Mutual Friend.

On Broadway in 1981, McEnery was part of the Royal Shakespeare Company's lengthy production of The Life and Adventures of Nicholas Nickleby (with Alun Armstrong and Ian McNeice), playing multiple roles (including Mr. Snevellicci). He reprised them the following year for the four part television version. Apart from a few films adapting classics (Osric in the Mel Gibson version of Hamlet, Little Dorrit, Black Beauty), most of his non-stage work from the 80s onward was in television. He was in the Joan Collins miniseries Sins, played Caligula on AD, made multiple appearances on The Bill, and played sidekick Sir William Wetherby in the second season of The Scarlet Pimpernel. Guest appearances included Poirot, Dalziel and Pascoe, Silent Witness (four episodes as a police superintendent), and New Tricks. 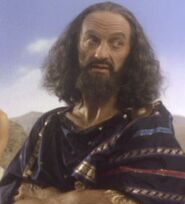 The StoryTeller: Greek Myths
Polydektes
"Perseus and the Gorgon" 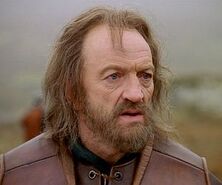 Merlin
Lord Ardente
Add a photo to this gallery

Retrieved from "https://muppet.fandom.com/wiki/John_McEnery?oldid=1278387"
Community content is available under CC-BY-SA unless otherwise noted.