Johnny Fiama is a crooner who sings in the style of entertainers like Frank Sinatra, Dean Martin and of course Tony Bennett, with whom he duetted in Muppets Tonight episode 106. His bodyguard is Sal Minella, a hot-tempered monkey who often attacks whoever he thinks is in the way of Johnny Fiama. Johnny also lives with his Mother. In addition to singing, Johnny Fiama also hosted his own segment on Muppets Tonight, "The Johnny Fiama Show".

His first appearance was a cameo role in Muppets Tonight episode 103. His most recent appearances include The Muppets' Wizard of Oz, the web series Statler & Waldorf: From the Balcony, the Jerry Lewis MDA Telethon, the "Bohemian Rhapsody" video, and the special Muppets Haunted Mansion. He also portrayed the role of Prince John in the Muppet Robin Hood comic books.

In a few episodes of Muppets Tonight, Johnny Fiama has promoted things that he was involved with. One of these was an album, "Johnny, We Hardly Heard You" (in episode 105), and his own theater restaurant, "Johnny's Pasta Playhouse" (in episode 208).

In Episode 104, Johnny decided to do something special to celebrate "The year of the chick". He decides to have a romantic dinner with a woman from the audience. But Sal messes up- he picks a woman who doesn't like Johnny's music. Johnny suggests they have veal- the meat of love- for dinner, but Clarissa refuses. Johnny starts to sing her a love song, but she storms off- Sal eats the veal and Johnny sings to him instead.

In episode 105, Cupid inadvertently shot Sal with an arrow, which made him fall in love with Johnny Fiama. By the end of the episode, Cupid was able to break the spell.

In episode 106, it was revealed that Johnny was a HUGE fan of Tony Bennett, and had a large collection of Tony Bennett items, including an automatic Tony Bennett robot that looked very realistic. Tony Bennett appeared on "The Johnny Fiama Show". He intended to sing with Johnny, but Johnny was so nervous he fainted. Sal comes up with a clever scheme- he removes the Tony Bennett Robot from its case and the real Tony stands in its place. When Johnny switches on the machine, he finds himself singing "Shakin' The Blues Away" with the man himself.

In episode 212, Johnny Fiama got so upset with his mother that he moved out of the house and into the KMUP-TV station. However, by the end of the episode, he forgave her, but moved to the YMCA.

Johnny Fiama and his sidekick, Sal, were two of the few characters introduced on Muppets Tonight that continued to be used as major characters in new Muppet productions (until the mid-2000s). One of Johnny Fiama's most notable post-Muppets Tonight appearances was in It's a Very Merry Muppet Christmas Movie, where, in the world where Kermit the Frog was never born, it is revealed that he would have been a bartender for Rachel Bitterman.

In The Muppets' Wizard of Oz, he served the Wicked Witch of the West, and seemed to have a romantic relationship with her.

Johnny made his first appearance since his "Bohemian Rhapsody" cameo in the 2021 Halloween special Muppets Haunted Mansion as one of Constance Hatchaway's previous husbands. 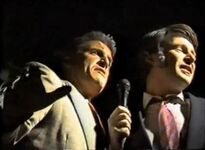 Johnny and Frankie Fiama in The Last Swing 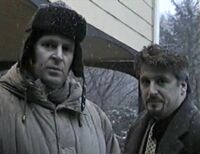 In The Fiama Brothers Play Fargo

Palisades Toys produced a Johnny Fiama Action Figure, with several repaints. A ceramic Johnny Fiama figurine was produced in France, as part of a series of Muppet fèves.