Jon Stone (April 13, 1931 - March 30, 1997), was an Emmy-winning writer, director, and producer who was involved in the creation of Sesame Street and continued to work on the show until shortly before his death.

Born in New Haven, Connecticut, Stone graduated from Williams College in 1952. He received a master's degree from the Yale University School of Drama in 1955, at which time he joined a CBS training program. Before helping to create Sesame Street, he worked on the popular children's television show Captain Kangaroo for CBS. He also worked on several other Muppet projects before and during his time on Sesame Street, and was the author of several books, including the popular The Monster at the End of This Book. He was married for 9 years to actress Beverly Owen.

Stone's earliest association with Jim Henson came in 1965, working on fairy tale projects, along with writer Tom Whedon, such as a proposed Snow White series. This was turned into a Cinderella pilot, which was shot in October of that year but never aired, and eventually became Hey Cinderella!. Stone also appeared in Henson's 1967 short film Ripples, as an introspective architect.

In 1968, Stone brought Henson and Joe Raposo to the attention of CTW president Joan Ganz Cooney when she started putting together Sesame Street. Stone wrote the pilot script, and was one of the three original producers of the program in addition to serving as head writer for the first season. He later became executive producer for seasons 4 through 9.

In a 1999 article, Children's Television Workshop Director of Research Edward L. Palmer recalled how Stone approached writing for Sesame Street in the early days of the production:

“One member of the CTW staff became terribly agitated when he first saw the curriculum statement. His concern was that if this document, with all its educational jargon, set the tone for the series, Sesame Street would be terribly dull instead of light and lively. However, head writer Jon Stone spoke for all of the key producers in his response to the concern; he said, first, that the curriculum document did not set the tone for the entertainment concent of the program, and second, that in sitting down to write a script, he would far rather start with a curriculum goal at the top of the page than with a totally empty page. What Stone understood was that stating a curriculum goal did not limit creativity, because there were still an infinite number of ways in which to express it on the screen.[2]”

Stone was the show's principal director until 1996. Working with Jim Henson, he helped to create many of the Muppet characters, including Big Bird and Cookie Monster. He was also responsible for the show's format and setting. Stone contributed occasional announcer voices (such as the soap opera promo spoof "School in the Afternoon"), and served similar duty on two Muppet Meeting Films. In April 1990, Stone hosted and directed a television special titled Sing! Sesame Street Remembers Joe Raposo and His Music. The special was created as a tribute to Joe Raposo, who passed away from lymphoma in February 1989.

The 2021 documentary Street Gang: How We Got to Sesame Street focuses a good amount of time on the show's founding members. One segment features Jon Stone's two daughters Kate and Polly, as well as Joan Ganz Cooney, Sharon Lerner, Christopher Cerf, and Brian Henson all providing personal anecdotes and insight into the man, specifically.

Jon Stone died of complications from Lou Gehrig's disease on March 30, 1997, two weeks before his 66th birthday. In his New York Times obituary, Joan Ganz Cooney describes Stone as "probably the most brilliant writer of children's television material in America."

Following Stone's death, a bench on the Literary Walk in Central Park was dedicated to him. The bench is directly to the right of the bench dedicated to Jim Henson. 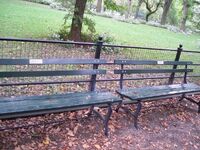 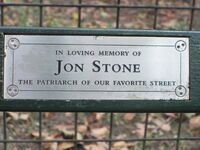