Jonah Hill (b. 1983) is a comedic actor, who has starred in multiple Judd Apatow films including The 40-Year-Old Virgin, Knocked Up, Superbad, and Forgetting Sarah Marshall.

At the 2012 BAFTA Awards, he talked with Miss Piggy on her Orange Film red carpet show.

Other credits include Night at the Museum: Battle of the Smithsonian, playing a clerk on an episode of NYPD Blue, and hosting Saturday Night Live. 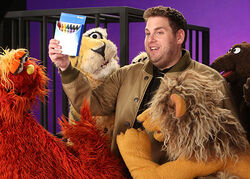 Wikipedia has an article related to:
Jonah Hill
Retrieved from "https://muppet.fandom.com/wiki/Jonah_Hill?oldid=1072512"
Community content is available under CC-BY-SA unless otherwise noted.