Kevin, Joe, and Nick Jonas, known collectively as Jonas Brothers, are a New Jersey-based boy band who gained national attention in 2006 under the Columbia Records label. Miss Piggy performs "That's Just the Way We Roll" with the Brothers in the television special Studio DC Hosted by Dylan and Cole Sprouse.

Nick Jonas began the band as a solo artist after appearing in Broadway musicals, but record executives soon signed all three brothers as a group act.

In 2016, Joe Jonas participated with the Muppets in the WE Day event in California.

In December 2019, Joe Jonas posted a social media video of him and his brothers (in the Sesame Street green room) discussing Burt Reynolds. Ernie walks in just as Joe says "Yeah, Burt's the best!" Ernie thinks they were talking about another Bert, but Joe tries to tell him otherwise before he awkwardly leaves. The video ends with a director's credit to "Jonas Brothers" (underscored by the Curb Your Enthusiasm theme).

In 2020, the three brothers appeared as guests on The Not-Too-Late Show with Elmo. In their part of the series, the brothers make goofy faces with Elmo, participate in a "silly freeze dance" challenge (which Nick wins), and the trio returns at the end of the show to perform "Brushy Brush." 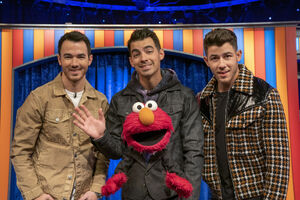 On The Not-Too-Late Show with Elmo
Add a photo to this gallery
Wikipedia has an article related to:
Jonas Brothers