Juanes (born Juan Esteban Aristizábal Vásquez, 1972) is a Colombian musician. Beginning his career in the Heavy Metal band Ekymosis, Juanes has since gone on to have a successful solo career, winning numerous Latin Grammy Awards, and becoming one of the best-selling Colombian musicians.

Juanes was honored with a 2010 AFTRA Media and Entertainment Excellence Award, along with Robin Roberts and the cast of Sesame Street.

He later appeared on Sesame Street during season 42, singing "Muevete" with Elmo and Rosita. He also appeared in a brief piece taped for Plaza Sésamo (shot on the Sesame Street set), illustrating the number 6 with a guitar. 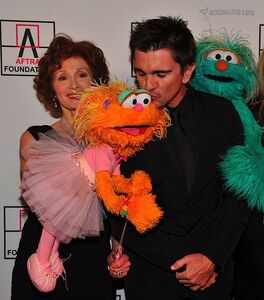 Juanes gives Zoe a kiss on the red carpet of the AFTRA Awards.
Add a photo to this gallery

Wikipedia has an article related to:
Juanes
Retrieved from "https://muppet.fandom.com/wiki/Juanes?oldid=1093359"
Community content is available under CC-BY-SA unless otherwise noted.